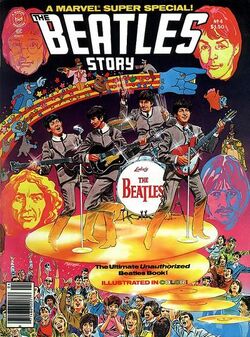 The Beatles were an English rock group from Liverpool that shaped not only music but also an entire generation. With 20 songs that hit #1 on Billboard's Hot 100 chart, the Beatles had a large number of ultra popular songs, including "Hey Jude," "Can't Buy Me Love," "Help!," and "Hard Day's Night."[1]

The history of the Beatles on Earth-616 mirrors that of their real world counterparts until about 1964. The intent of this page is to explore the events that are unique to the Earth-616 version of the Beatles. In some cases the Beatles have been depicted as being active during the Modern Age. Barring any sort of explanation these should be considered topical references per the Sliding Timescale of Earth-616.

The Skrull Beatles were a group of Skrulls that took on the appearances of the original Beatles, with each taking the form of a Beatle. The faux-Beatles were intended to take the place of the real Beatles, and use their positions to launch a Skrull invasion. John, however, thought the Skrull Beatles could do more than an alien invasion, and convinced their bosses to give them free reign.Much like the real Beatles, the Skrull Beatles eventually found their interests leading in different directions, leading to the band's break-up. They were all later revealed to have been killed,[2] save for John, who died later.[3]

Unless these appearances can be attributed to the Skrull Beatles, the following "appearances" of the Beatles should be considered topical references.

During the early days of the Fantastic Four, the Thing and Human Torch took their girlfriends Alicia Masters and Doris Evans out to see a live musical performance. When the box office was robbed, the pair stopped the crooks responsible. During this ordeal, they crossed paths with the musicians in question. These musicians have been depicted as the Beatles as they appeared circa 1965. [4]

The wedding Mister Fantastic and the Invisible Girl attracted a massive audience, including members of the superhero community and celebrities.[5] In at least one account, musicians resembling the Beatles were depicted as being in attendance.[6]

The work of the Beatles (or their Skrull impersonators) have had a cultural impact on many of the costumed heroes of the Earth-616 universe. There are many instances where various characters song music by, or made reference to, the Beatles.

The Beatles wig that Thing wore was given to him by the Yancy Street Gang.[7]

Beast of the X-Men while singing under the Manipulator's control, replaces 'Father McKenzie' with 'Professor Xavier' in Beatles' classic Eleanor Rigby.[8]

While testing Dominic Destine to determine if they are from the same reality, Kitty Pryde asked him about The Beatles, Madonna, John Wayne and Winston Churchill.[9]

Jim Braddock hummed a song from the Beatles as he messed with the X-Men, deciding Helter Skelter to be too obvious, and passing on Magical Mystery Tour.[10]

Retrieved from "https://marvel.fandom.com/wiki/Beatles_(Earth-616)?oldid=5809891"
Community content is available under CC-BY-SA unless otherwise noted.