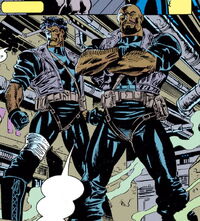 Jesse and Terrence Aaronson both served as members in Apocalypse's Elite Mutant Force as the Bedlam Brothers. They worked closely with Cyclops and Havok.

They were sent on a mission with Emplate and his sisters the Monets to track down Christopher Summers, the father of Cyclops and Havok, who had been impregnated with a member of the Brood race. They took time off from their mission to enjoy some R&R with Havok at the Heaven Bar. They stayed behind as Cyclops and Havok went out to search for the Brood.[2]

Some time later when Sinister decided to abandon Apocalypse because their goals greatly differed, the carefree Bedlam Brothers convinced Havok to once more join them at the Heaven Bar. There the brothers prevented an attempted suicide bombing by Henry Gyrich before returning to base. There they found that Sinister had destroyed his lab and left the group. The Bedlam Brothers suggested that Cyclops take command, a position that Cyclops reluctantly accepted.[3] The Bedlam Brothers joined Cyclops in searching for traces of Sinister on Liberty Island.[4]

When it was discovered by the Shadow King that Havok's lover, the human Scarlett McKenzie, was really a spy for the Human High Council the Bedlam Brothers brought her in.[5]

Retrieved from "https://marvel.fandom.com/wiki/Bedlam_Brothers_(Earth-295)?oldid=5380130"
Community content is available under CC-BY-SA unless otherwise noted.