It has been suggested that this article or section be merged with Beelzeboul (Earth-616). (Discuss)
Beelzebub 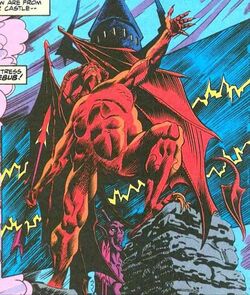 Beelzebub was an Angel living in Heaven.

According to unconfirmed sources, Beelzebub became a fallen angel, cast out of Heaven,[1] possibly for participating in Lucifer's rebellion.

The identity of Beelzebub was often attributed to other entities, or usurped by them:

Beelzebub also became known as Satan and the Devil.[2]

According to Mephisto, Beelzebub often mocked him for not "getting" Hitler.[5]

Charlie Hagarth was able to collect information about an apocryphal book, the Book of Satan, from various sources: "an obscure mention of it in hieroglyphics... a word in sanskrit there... a hint of it in Icelandic bardic poetry". In that book was the Hymn to Beelzebub, a sentence meant to enslave the Devil to do the speaker's biding.

In order to protect himself, Beelzebub infiltrated the expedition as "Jean", to move the Book each time Hagarth was closing in. Ultimately, as he tried to remove the book from the tomb of Assadmaian, in Iraq, Beelzebub was forced to reveal himself to Hagart and devoured him, before looking for a new place to hide the book of Satan.[2]

He was summoned by Talvuras to defeat his opponents Dragonus/Dragonis and Thald. He killed Thald but failed to hit Dragonus, who used his dragon blade to pierce Beelzebub's heart. Seemingly mortally wounded, Beelzebub receded into the fire.[9]

When summoning Mephisto, Doom invoked his name along with Satan's, Baphomet's and Thog's.[10]

At some point, he built an ice road through Hell, but the road started to melt fast.[11]

Like this? Let us know!
Retrieved from "https://marvel.fandom.com/wiki/Beelzebub_(Earth-616)?oldid=6470685"
Community content is available under CC-BY-SA unless otherwise noted.