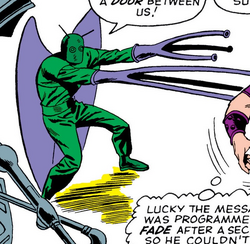 This was the original armor created by Abner Jenkins for conducting criminal activities. It was badly damaged after run-ins with Spider-Man (Peter Parker), and finally destroyed while battling Iron Man (Tony Stark) in Iron Man Armor Model 4.

Mylar wings mimicked the flight pattern of beetles, while also serving as razor-sharp weapons, shields and digging devices. The wings deployed from a sheath-like compartment in the back of the armor. The armor could cruise along at speeds of roughly 45 mph. Reaching higher speeds was possible by directing more power to flight systems.

Made of composite material, it enhanced its wearer's durability and strength (lifting around 800 lbs.). Suction cups allowed the armor to grip almost any surface.

Like this? Let us know!
Retrieved from "https://marvel.fandom.com/wiki/Beetle_Armor_MK_I?oldid=6463809"
Community content is available under CC-BY-SA unless otherwise noted.