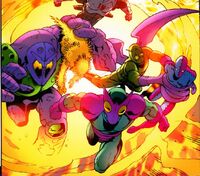 Three electromechanical technology students (Joaquim Robichaux, Elizabeth Vaughn and Gary Quinn) at Rutgers University in New Brunswick, New Jersey, broke into a warehouse, where they found and stole high-tech equipment from the CSA, including armors used by Abe Jenkins, known as the Beetle, a Thunderbolts member. They used the MK-1, MK-2 and MK-3 to commit crimes, and even though the CSA knew about this, they didn't have the resources to resolve the situation.[1]

Later, the SHRA passed, and the Thunderbolts registered in the Initiative. The CSA convinced the Thunderbolts to track down and apprehend the Beetles, and later they were taken to the Folding Castle. There, they were brainwashed with dreams promoting Thunderbolts service. The Beetles were drafted into Operation: Justice Like Lightning (an army of criminals into government service supervised and trained by the Thunderbolts, overseen by Dallas Riordan and Henry Gyrich). Also, they and the rest of the recruits were fitted with a subdernal phase-shift locator that teleported them to a holding facility if they disobeyed. Showing great command of the cybernetic systems, they soon apprehended super-villains like Porcupine and Eel. Since then, the Thunderbolts have dissolved and the Initiative has disbanded.[2]

Retrieved from "https://marvel.fandom.com/wiki/Beetles_(Thunderbolts_Army)_(Earth-616)?oldid=5544863"
Community content is available under CC-BY-SA unless otherwise noted.