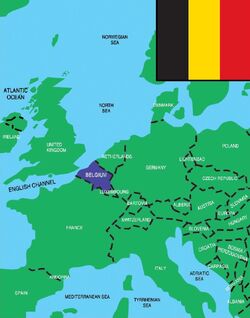 Belgium, officially the Kingdom of Belgium, is a sovereign state in Western Europe. It is a member of the European Union. It houses the European Parliament in Brussels, its capital and largest city. The nation is also a member of N.A.T.O..[2]

After Napoleon's fall, Belgium was given to William of Orange to be part of the Kingdom of the Netherlands.

After the Belgians revolted against the Kingdom of the Netherlands in 1830, they finally became an independent nation, as a constitutional monarchy led by Leopold Saxe-Coburg.[3]

During World War I Belgium was invaded by Germany. In Ypres, Belgium; April 22, 1915 The Canadian Army engaged the German army. James "Logan" Howlett was assigned to the Devil's Brigade, a special Canadian military unit. Logan's commanding officer was a super-humanly strong man known as Silas Burr, who was formerly an agent of the Pinkerton Private Detective Agency, where he abused his position, committing several atrocities, even burning down a schoolhouse full of children once.[4]

In December of 1944, American soldiers Combat Kelly and Cookie Novak clashed with Nazi soldiers in the region.[5]

In the Ardennes, January 1945, the Valkyries of Asgard found themselves on Midgard and discover a slaughtered host of troops. Brunnhilde suspected that some form of magic had brought them to this world. Before she could order her sisters to depart, a surviving soldiers warned them that the Thule Society had unleashed something terrible that they failed to control. Brunnhilde saw the cause: a snow wyrm. Knowing that neither of them belong on Midgard, Brunnhilde slew the wyrm and promised to find those who summoned all of them to Midgard, declaring "No thing of Asgard should rain destruction on the world of man".[6]

In early February, 1945, Captain America and Bucky also swept through the town of Bastogne in Belgium to help out the GIs. They learned that the village had been overtaken by vampires who had begun feeding on American soldiers. After cutting their way through one vampire after another, they discovered that the vampire progenitor was a Nazi named Helmut von Schuler. Schuler had in turn been transformed into a vampire by the infamous Baron Blood. The mission proved harrowing for both Captain America and Bucky as they were forced to execute not only vampire soldiers, but children as well.[7]

Beast of the X-Men battled Commander Courage and the Wereborgs in Brussels.[8]

In Ghent, Iron Man met with the heads of the European Union. He revealed his identity to them as Tony Stark and hoped to advise them on how to deal with the financial crisis hitting the world.[9]

Daken traveled to Brussels on a train to confront his father.[10] He blew up a bank to get his fathers attention and the two battled using their claws but are stopped by the arrival of Cyber.[11] He tried to kill them both but they were able to escape thanks their their Healing Factor's.[11]

Like this? Let us know!
Retrieved from "https://marvel.fandom.com/wiki/Belgium?oldid=6420014"
Community content is available under CC-BY-SA unless otherwise noted.