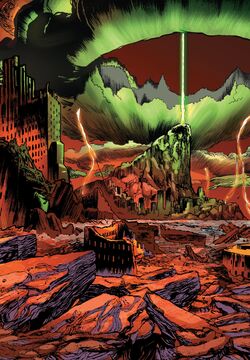 You did indeed take me all the way down... Past the country of Hell... To what lies below it. Hell actually seems quaint to me now. It had hierarchies and structures. Rulers and rules. It was only a place, like other places... And this is something else. Something deeper, at the bottom of reality, underneath everything... The concept of Hell. The foundation. The bedrock. The Below-Place.

The Below-Place is the bottom layer of reality, and the bedrock of Hell.[3] It is the domain of a malevolent deity called the One Below All—the dark counterpart to the One Above All,[4] whose ultimate goal is to destroy everything in the Multiverse until becoming the sole presence in it.[5]

The Below-Place consists of a red-tinted deserted landscape, where the only visible strutures are buildings in ruin.[2] It's covered by stormy clouds that constantly produce green lightnings.[6] When people from the land of the living were dragged into the Below-Place, this dimension also manifested Qlippoth, empty husks copying people known to the visitors.[7]

The elusive and anomalistic third form that gamma radiation can take besides a particle and a wave originates from the Below-Place, as an emanation of the One Below All. Because of this, gamma mutates, who are created when exposed to this form of gamma radiation, are plunged into the Below-Place after death, through a barrier called a Green Door, and it is through another Green Door that they can eventually return to life, albeit with no memory of their stay.[6][3] The One Below All can exert its influence outside the Below-Place through gamma mutates, and even possess their bodies when a Green Door manifests for them. However, it needs a host personality to act through since it possesses no mind of its own.[5] The One Below All eventually found this host in the form of the soul of Brian Banner, who was sent to the Below-Place after dying during the Chaos War.[4]

Using Brian, the One Below All managed to manipulate different gamma mutates until it used the Absorbing Man to open a Green Door on the Los Diablos Missile Base by absorbing the remnant gamma energy in the environment from the detonation of Bruce Banner's Gamma Bomb years prior. Everybody present in the scene was plunged into the Below-Place along with the Absorbing Man, namely Banner's alter-ego the Hulk, Gamma Flight, reporter Jackie McGee, and Shadow Base operative Bushwacker.[2]

When he arrived at the Below-Place, the Hulk was split from Bruce Banner, whom Brian captured with the intention to make him the new vessel for the One Below All in order to bring the Below-Place into Earth.[4] The Hulk and McGee made their way through the Below-Place, eventually confronting Qlippoths of Rick Jones, General Ross and Jackie's father. In the meantime, Gamma Flight member Puck managed to find the Absorbing Man and convinced him to help things right.[7] When it was high noon, the One Below All manifested out of the clouds of Below-Place,[4] and summoned hordes of demonic creatures to kill the Hulk. Puck and the Absorbing Man made their way to the fountain of gamma where Brian had Bruce captured, and the Absorbing Man soaked up the gamma energy to then pass it onto the Hulk, replenishing his strength. The Hulk subsequently attakced the One Below All, dissipating the creature with a single thunderclap. Afterward, the Hulk merged back with Banner and closed the Green Door, sending back to the real world everybody who had been trapped.[8]

Like this? Let us know!
Retrieved from "https://marvel.fandom.com/wiki/Below-Place?oldid=6416947"
Community content is available under CC-BY-SA unless otherwise noted.