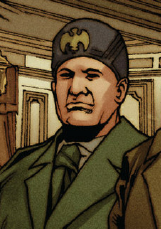 Benito Mussolini was the founder of the fascism, and the leader of Fascist Italy.

In order to defeat his enemies, he allied himself with others authoritarian leaders, the British Fascist Xavier, the Imperial Japan military leader Tojo, the Nazi Hitler and the Soviet Joseph Stalin.

This alliance was successful, but once the Allies were defeated, Xavier turn-back on his allies and slain them, probably including Mussolini.[1]

Very little was mentioned or shown about this character but we can assume that his life seemingly mirrored his mainstream or real counterpart.

Like this? Let us know!
Retrieved from "https://marvel.fandom.com/wiki/Benito_Mussolini_(Earth-13410)?oldid=4356892"
Community content is available under CC-BY-SA unless otherwise noted.