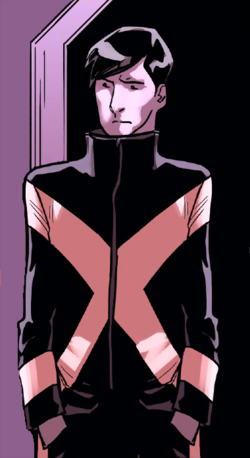 This Benjamin Deeds's life mirrors that of his mainstream counterpart up until the point Professor X's last will and testament revealed the existence of the omega-level mutant Matthew Malloy.

He was present with the rest of the other students when Storm and Beast arrived at their school to let Cyclops know that he needed to be at the reading of Professor X's will. All of the teachers from the New Charles Xavier School decided to go via Magik's teleportation leaving Benjamin and the others behind.[1]

With nothing else to do, the Stepford Cuckoos set up a training session in the Danger Room for the others against holographic versions of the Avengers. He participated in the brawl until the program was shut down due to fellow teammate Triage's dislike of who they were fighting.[2]

Seemingly those of the Benjamin Deeds of Earth-616.

Seemingly those of the Benjamin Deeds of Earth-616.

Like this? Let us know!
Retrieved from "https://marvel.fandom.com/wiki/Benjamin_Deeds_(Earth-14923)?oldid=5444708"
Community content is available under CC-BY-SA unless otherwise noted.