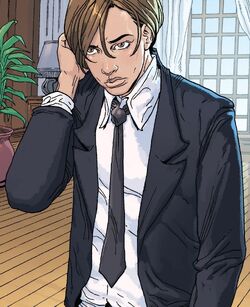 Benjamin Deeds was an average college student at the University of Texas at Austin until his mutant powers manifested during a pro-mutant rally on campus. Media and other students seemed to welcome him with open arms.[3]

The festivities were cut short by the arrival of Cyclops and Magneto to retrieve Benjamin. They were shortly followed by the original five X-Men.[3] A battle ensued, and Benjamin was left at the campus.[4] Benjamin was expelled from school for being a mutant and every time he tried to call his parents by phone they didn't answer. While leaving the school, Scott approached him again and convinced him to come with him and promised him that he could leave if he didn't like it.[1]

Benjamin and Scott were then teleported to the site of what was once Weapon-X, but now the new Charles Xavier Institute for Gifted Youngsters, the headquarters of the Extinction X-Men, and the new mutant revolution. After joining Cyclops' team, Benjamin became acquainted with the other students and his professors a little more. The group then received new students: the Stepford Cuckoos and the displaced young Angel. The team was then forced into Limbo to fight for their lives against Dormammu and his Mindless Ones. Benjamin stood in the back of the group so they could fight, as his powers weren't useful yet in combat. A rock hit his head, nearly killing him and is only saved when Magik casts them out of Limbo and while Benjamin has stopped breathing and his mind has no activity, Triage healed him and he came to.[5]

Benjamin remained with the new X-Men, but felt insecure about his abilities and contribution to the team. It wasn't until Emma Frost took an interest in him that he discovered the full extent of his powers. Emma and Magik took Benjamin to Atlantic City to assist in training his powers. His final test was to have him hand deliver a letter to Timothy Dugan inside a secured S.H.I.E.L.D. facility. Benjamin was able to complete his task, but was caught due to the contents of the letter. He was retrieved by Magik, and with his infiltration powers proven, had earned his place with the X-Men.[6]

After Cyclops disbanded the New Xavier School and requested that the students enroll in the Jean Grey School, Benjamin, along with the other students, were outraged. They assisted Dazzler in capturing Mystique. Later at a gig where Dazzler was performing, Benjamin, Fabio (Goldballs), Christopher (Triage), the Stepford Cuckoos, and David (Hijack) concocted a plan not to join the other school and create their own group instead.[citation needed]

The students appeared at a high school to stop an angry mutant, Blake, who had the power to summon demons. The Cuckoos shifted into their diamond form and simultaneously used their telepathy at the same time to hinder Blake's assault on her mutant-hating father, while Benjamin was trying to stop her using his powers, inducing her to like him and trust him. During the onslaught, Celeste and Fabio were injured, but quickly healed by Triage.[7] The battle made Fabio an internet sensation until the public found out he is a mutant and injure him with a glass bottle. Enraged, the Cuckoos nearly kill the mutant-hating attacker. With the other students, they headed to the Jean Grey School and admit to Storm that they were not ready for the world and the world was not ready for them.[citation needed]

When Kitty Pryde relocated the X-Men in New York and the school was renamed to Xavier Institute for Mutant Education and Outreach, Benjamin decided to join in along with Triage and the Stepford Cuckoos. He became part of Jubilee's team, consisting of Nathaniel Carver (Hindsight), Quentin Quire, Lin Li, Bling!, and Eye-Boy.[8]

When a mysterious shadow in Central Park started stealing mutants during the night, Quentin convinced his classmates to investigate. They found themselves face-to-face with Emplate possessing his sister Monet's body.[9] After defeating the Rat King,[10] Quentin convinced Benjamin and Nathaniel to join him for a night out. They were stuck in a villain-infested auction, where they had to destroy a priceless weapon, all without getting caught by the auctioneer, Kade Kilgore. During the mission, both Nathaniel and Benjamin discovered their feelings for each other.[11]

A few days later, Nathaniel opened up to Benji about their current relationship, that he knew and noticed his signals to make a move at him. So he explained his fear with his powers and how it always destroyed the past relationships he had, with his ex-boyfriend and his ex-best friend, just to mention a few. Because every time he saw a person’s past, he ended up judging them. Nathaniel was afraid that it might happen again if he was together with Benjamin. Since he was terrified of losing him, he friend-zoned him just so their relationship wouldn’t end up a mess. Really disappointed, Benji understood and accepted the situation.[12]

Monet, merged with her brother Emplate, arrived at the institute in order to try to kill the students and drain their life forces. While Jubilee, Husk, and Chamber were battling the threat, inside the classroom, Roxy, Benjamin, Nathaniel, and Quentin came up with a plan on how to defeat him. The students noticed that Emplate strangely did not even try to feed or copy Quentin's power. Nathaniel revealed to them that he was responsible for that. Apparently, Emplate wouldn’t let Monet steal any other mutants’ powers because she’s already stolen Nathanial’s, which allow him to see people’s memories when he touches them. When Emplate used his power, it actually weakens the link between Emplate and Monet, so if Monet created that kind of connection with others, it could cause Emplate to lose control of her, so Jubilee's team made their battle strategy.

Roxy grabbed Monet and a connection between the two of them was formed. Monet started to freak out, so Jubilee, in order to overwhelm her mind, told Chamber and Husk to grab her, causing the psychometry powers stolen from Nathaniel to display all their old Generation X memories. In the end, their memories were enough powerful to evict Emplate from Monet. Jubilee thanked Quentin for curing her, and he agreed to stay at the school, earning a hug from Benjamin. A few hours later, Benjamin and Nathaniel were sitting on a bed having a nice conversation. Benjamin expressed how worried he was for him when Emplate attacked them. Nathaniel responded that being around with Benjamin and being in the school with him by his side made him feel safe. Benjamin opened up saying that he wanted to kiss Nathaniel and the two made out. This also activated Nathaniel’s psychometry power which made him see Benjamin’s past, from the time he was a student under Cyclops mutant revolution days to the time they first met and developed feelings for each other. A few days later, the team were preparing a surprise party for Roxy, who was going home to visit her family for a while. Kitty Pryde arrived to congratulate Jubilee on keeping her class alive.[13]

Benjamin is a new mutant activated after the Phoenix dispersion, and has displayed the following mutant powers:

Like this? Let us know!
Retrieved from "https://marvel.fandom.com/wiki/Benjamin_Deeds_(Earth-616)?oldid=6148528"
Community content is available under CC-BY-SA unless otherwise noted.