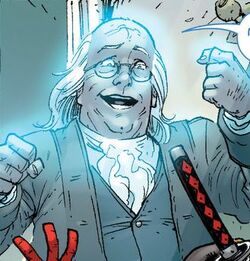 I'm saying that I believe in inalienable human rights for all -- even non-humans! I'm saying together we can kick both Dracula and Shiklah asses! Together! What say you? Surely we hang together, or... we shall all hang separately?

Benjamin Franklin was an American polymath and one of the Founding Fathers of the United States of America. He was leading author, politician, scientist and diplomat. Franklin founded the University of Pennsylvania.

Franklin along with the other Founding Fathers began the American War of Independence from between Great Britain declared themselves the independent United States of America.

Franklin was a member of the Brotherhood of the Shield. The war was predicted by Nostradamus.[3]

Franklin experimented with electricity, one night he flew a kite in a storm, conducting the electrical charge into a key. A time traveller named Tommy Tyme arrived from the future. He showed the visitor some his inventions. Revolutionary troops visited Franklin and asked him to write up the Declaration of Independence a. Inspired by this, Tommy asked to join the fight.[4]

While Dr. Strange and Clea were traveling through time to study America's occult history they made the acquaintance of Benjamin Franklin. Dr. Strange left Clea with Franklin as he went to fight Stygyro. During this time, Franklin seduced Clea into having sexual intercourse with him.[5] When Dr. Strange returned to retrieve Clea, the two announced that they were engaged. Dr. Strange promptly used his powers to destroy Franklin, explaining that the real Benjamin Franklin was at the Second Continental Congress and that the person she slept with was really the wizard Stygyro in disguise. Eventually, the real Benjamin Franklin returned to bid them farewell, especially Clea.[6]

Franklin encountered Captain America who was being sent through time by Mister Buda. His costume inspired him and Betsy Ross to design the first US flag.[7]

On July 2, 1776, the Continental Congress formally voted for independence, and issued its Declaration on July 4. The Founding Fathers together with several other key players of their time, structured the democratic government of the American Republic. Skrull subversives arrived and plant to make alterations to the constitution but was stopped by the time travelling Fantastic Four[8]

Centuries later, Franklin returned as a ghost to assist Deadpool on his mission to kill the newly resurrected zombie presidents.[9] After that, he continued to stay with Deadpool to assist him with trying to help him stop Vetis from killing his friend Michael. However, he left Deadpool after he killed Michael as part of his plan to defeat Vetis.[10]

Franklin later returned to Deadpool's life,[11] and started living at his house.[12]

When U.L.T.I.M.A.T.U.M. tried to have revenge on Deadpool for destroying their Helicarrier and slaughtering countless of their agents, they tried to kill his allies by attacking their house. However, they survived the assault thanks to the magic of Michael the Necromancer and Franklin's ghost, and escaped to a safe location. After Deadpool retaliated and murdered all of U.L.T.I.M.A.T.U.M.'s agents, he decided to give up his life as Deadpool. As he was celebrating the start of a new life with his friends and family, an incursion between Earth-616 and the Earth-1610 caused the collision and destruction of both universes' planet Earth, with Deadpool and his allies dying in the process.[13]

The universe was eventually brought back, together with its inhabitants, including Benjamin's ghost. However, he felt that his extended existence was growing stale. He decided to leave, considering the chance of another adventure, which could be his last before moving on to the afterlife.[14]

During his experiments with electricity, Franklin discovered a way to exist as a being of pure electricity after his body died, although he has shown no electrically based powers. This has effectively made him a ghost.

Possessed the Eternity Mask at one time.[15]

Like this? Let us know!
Retrieved from "https://marvel.fandom.com/wiki/Benjamin_Franklin_(Earth-616)?oldid=6474774"
Community content is available under CC-BY-SA unless otherwise noted.