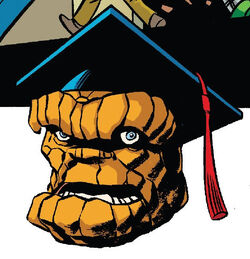 Hair
No Hair At All
Unusual Skin Color
Orange
Unusual Features
The Thing's body is covered with an orange, flexible, rock-like hide. The Thing has no apparent neck. He has only four fingers (including the thumb) on each hand and four toes on each foot. The Thing has no outer ear structure.
Origin
Origin
Human mutated by exposure to cosmic rays
Reality
Earth-11120
Place of Birth
New York, New York
Creators and Appearances
Creators
Elliott Kalan, Dean Haspiel
First Appearance
Shame Itself #1
(November, 2011)

Ben and Reed Richards went to there college reunion. Reed was initially excited to be able to discuss his powers and accomplishments with his classmates, and Ben was worried no one would care because of his appearance. However, when they arrived Reed found he wasn't on the list and was only let in because they recognized Ben Grimm as the quarterback. As the event went on Reed found himself being almost unknown to practically everyone there while Ben was getting all the positive attention, and event won the Dean's honors alumni award. When Reed and Doctor Doom fought Ben left with a woman commenting that Reed was just catching up with an old friend.[1]

Like this? Let us know!
Retrieved from "https://marvel.fandom.com/wiki/Benjamin_Grimm_(Earth-11120)?oldid=5216363"
Community content is available under CC-BY-SA unless otherwise noted.