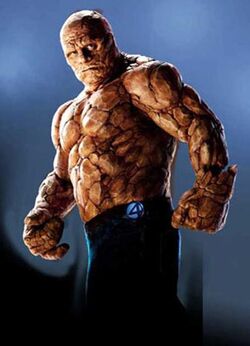 An old friend of Reed Richards, Ben accompanied him in finding funding for his research into the cosmic rays. While placing samples outside the space station for research, the cosmic storm hits the station while Ben was still outside, resulting in him being exposed to the cosmic cloud with even less protection than the rest of the team inside the station. As a result, his fiancé, Debbie, left him because she couldn't cope with his transformation, although Reed promised that he would do whatever it took to cure Ben.

After weeks of research with no results, Ben was manipulated by Victor into believing that Reed was delaying his research so that he could spend time with Sue. With Reed having developed a chamber that could duplicate the cosmic storm but lacking the power necessary to control the radiation generated, Victor tricked Ben into using the chamber so that he could drain Ben's power to increase his own mutation. However, after learning what Victor had done, Ben entered the chamber to expose himself to a new 'dose' of cosmic radiation, restoring his powers and appearance. Although Reed offered to work on restoring the chamber, Ben decided to accept his condition, even finding a new relationship with Alicia Masters.[1]

By the time of Reed and Sue's wedding, Ben has mostly accepted his appearance, although he enjoyed the opportunity to briefly swap powers with Johnny to demonstrate Johnny's odd condition after contact with the Surfer causes Johnny to switch powers with the rest of the team whenever he comes in contact with them. When Victor returns, Ben immediately charged him and threatened to break his neck, but accepted the temporary alliance due to the greater threat posed by the Surfer. When Johnny borrows the powers of the entire team to oppose Victor after he takes the Silver Surfer's powers, Ben uses a demolition crane to knock Doom off the Surfer's board and into the ocean.[2]

Like this? Let us know!
Retrieved from "https://marvel.fandom.com/wiki/Benjamin_Grimm_(Earth-121698)?oldid=6426731"
Community content is available under CC-BY-SA unless otherwise noted.