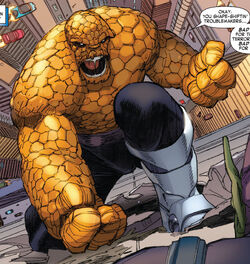 Hair
No Hair At All
Unusual Skin Color
Orange
Unusual Features
The Thing's body is covered with an orange, flexible, rock-like hide. The Thing has no apparent neck. He has only four fingers (including the thumb) on each hand and four toes on each foot. The Thing has no outer ear structure.
Origin
Origin
Human mutated by exposure to cosmic rays
Reality
Earth-12665
Place of Birth
New York, New York
Creators and Appearances
Creators
Jonathan Hickman, Ron Garney
First Appearance
Appearance of Death
Fantastic Four #605
(April, 2012)
Fantastic Four #605
(April, 2012)

In the distant future of Earth-12665, Thing is the only member of the original Fantastic Four who is still alive. This is because he can only age during his 1 week as human each year, and thus ages very slowly. Along with Franklin Richards, whose powers also granted him immortality, he continued the legacy of the Fantastic Four and the Future Foundation throughout centuries.

Like this? Let us know!
Retrieved from "https://marvel.fandom.com/wiki/Benjamin_Grimm_(Earth-12665)?oldid=5648008"
Community content is available under CC-BY-SA unless otherwise noted.