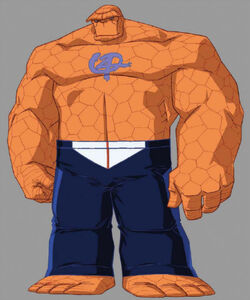 After kidnapping Thing , Mole Man attempted to get him join forces with him underground paradise where appearances didn't matter.[1]

As the Thing, Ben possesses considerable super human strength, enough he was able to go toe-to-toe in a fight against the Hulk for a period. His body tissues are of significant durability and hardness to withstand projectiles and punches and falls.

Like this? Let us know!
Retrieved from "https://marvel.fandom.com/wiki/Benjamin_Grimm_(Earth-135263)?oldid=6489880"
Community content is available under CC-BY-SA unless otherwise noted.