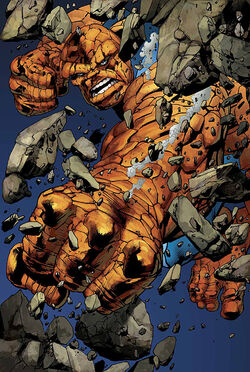 Guess what time it is? Seriously, you'll never guess.

After more than fifty hours of labor, Benjamin Grimm was born with a collapsed lung but survived and grew up in the neighborhood of Queens, in New York City. At the age of five he befriended Reed Richards and the two remained close friends throughout their childhood.[9] At a young age he attended Midtown Middle School, where he became the star linebacker for the school football team, earning himself the nickname The Grimm Reaper.

Possessing an unique intellect, Reed was often the target of school bullies, and Ben took it upon himself to protect Reed from those who would seek to persecute him. As reward for this valuable service, Reed agreed to help Ben with his homework, which was the dread trigonometry.[1]

Ben and Reed parted ways when Reed was only ten-years-old. A government sponsored think-tank recruited Reed into working for them at the Baxter Building. Ben continued with his education and eventually entered college.

Years later on spring break, Grimm was backpacking across the desert of Nevada when he learned that his old school pal was in the area. He visited the testing sight of a teleportation project, which sought to pierce the dimensional barrier into an antimatter realm called the N-Zone. Ben knew that Reed had always experimented with quantum physics, and wanted to see how his old friend was getting along. During the visit, once given an A-Level Clearance,[9] Reed introduced him to his colleagues, Victor van Damme, Sue Storm and her younger brother, Johnny. He invited him to witness the first field test of the N-Zone Initiator.[10]

The experiment proved to be a tragic disaster. Moments before the initial testing phase was to commence, Victor Van Damme adjusted the coordinates on the machine causing it to malfunction. It tore open a dimensional breach, releasing a blinding wave of energy, which shunted all five witnesses to different geological locations.

Ben awakened in a small village in Mexico. As he rose to his feet, he discovered that he was no longer entirely human. The N-Zone effect increased his body mass, transforming him into a gargantuan thing with flesh composed of living rock. Members of the Baxter Building research team tracked him down and brought him back to New York for testing. There, Ben learned from Reed that he had made a miscalculation in the experiment that caused them to possess their powers. Ben angrily attacked Reed for his condition before being subdued by Reed's powers. When the Baxter Building was attacked by Arthur Molekevic's monster, Ben leapt from the skyscraper and battled the beast. Ben, Reed and Johnny pursued the monster into Molekevic's hidden headquarters beneath Manhattan, where they retrieved Susan Storm, though Ben's massive strength inadvertently collapsed Molekevic's chambers.

As the U.S. government wanted to keep the foursome a secret, Ben was confined to the Baxter Building for months after his change and limited to weekly phone calls to his family. He accompanied his teammates to Denmark to confront Victor Van Damme, and again into the N-Zone on a voyage of exploration. While Reed and Sue had each other, and Johnny was allowed out in public, Ben was the most isolated of the four, unable to pursue his interests or see his friends, his pro football dreams dead. His first real joy since being changed came when the quartet entered the N-Zone and Ben space-walked for the first time; he found similar moments venturing into the Jurassic Era. After the team went public as the Fantastic Four while battling the alien Nihil in Las Vegas, Ben slowly began to accept what he'd become, even adopting an old football coach's slogan as his battle cry: "It's Clobberin' Time!"

When the Ultimatum Wave struck, Grimm stopped a whale from crashing into a building. After regaining consciousness, he saw to caring for a comatose Susan Storm. When Susan recovered, she and Grimm found Johnny at the ruins of Dr. Strange's Sanctum Sanctorum, being held prisoner by the demon Dormammu. The three successfully defeated Dormammu, who was turned into a powerless human being.

Following Magneto's defeat, Reed confided in Ben that Doctor Doom was directly responsible for causing the Ultimatum event. Reed concluded that Doom had to be killed to prevent any similar incidents. Grimm complied and personally killed Doom in his own frozen kingdom.[11] Following Dr. Franklin Storm's funeral, the Fantastic Four disbanded. Ben decided to work for S.H.I.E.L.D. as a pilot as previously recommended by General Thunderbolt Ross.[12]

Ben returned to New York to visit Sue. He professed his love for her, but received silence in return. Hurt that she didn't return the sentiment, he left, as a piece of his rocky skin fell off of his arm. Moments later a gelatinous creature attacked her.[7] Ben and Sue managed to fight off the creature long enough for it to successfully complete the destruction of the Baxter Building and self-destruct. They joined Johnny at Reed Richards' home, only to learn of his and his family's death.[13] In a battle at Peter Parker's home, another of the alien creatures managed to hit Ben with an energy blast. When Ben recovered he found that more rocks had fallen from his body and he started to glow with white light.[14] After Sue confessed she loved him back, Ben started to glow more and then exploded. In the wake of the explosion, a glowing purple Ben Grimm in human form emerged.[15]

It was soon discovered that Reed Richards had faked his death and was behind the attacks. The gathered heroes located Reed in the Negative Zone and confronted him with an all-out assault. They bested him and his alien creatures with little effort. Johnny even deformed Reed's face with the hottest flame attack he had ever produced in revenge for hurting his sister. Nova and Spider-Man managed to steal the technology that Reed was using to create his new facility and jump between universes, causing the entire facility to collapse. Reed was flung from the facility, causing him to drift aimlessly in the Negative Zone.

Sue approached Ben and professed her love for him, as he did for her before the attacks started. She proposed to him, stating that every good moment she ever had was because he was near her. Ben accepted, willing to start a new chapter in his life.[16] Ben and Sue later attended Peter Parker's surprise birthday party.[17]

Ben aided Sue Storm in her assault to Reed's base, the Aleph-One, during his take-over of Earth along the Dark Ultimates, and revealed to be able to return his rocky form, and still project energy.[18] The Reed Richards Sue and Ben defeated was revealed to be a replica made out of a segment of Reed's body. They were attacked by Quicksilver, who heavily damaged both Sue and Ben.[19] Ben, Sue, and the Ultimates were able to eventually defeat and capture Reed.[20] The Ultimates, with Ben, Sue, and Reed later faced Galactus despite the loss of Captain America and Thor. However, they managed to defeat the cosmic entity and exile it to the Negative Zone, saving Earth.[21]

Purple Glowing Form and Rock-like Skin: The Thing possesses a smooth, rock-like hide as a result of exposure to the extra dimensional energy. The mutagenic process caused his musculature, bone structure, internal organ composition, soft tissue structure, and skin to greatly increase in toughness and density. As a result of undergoing a body-wide secondary metamorphosis in his rocky form Ben possesses the ability to transform his body into a purple glowing form that apparently possess the same powers as before with some additional abilities. He can change from his purple form to the rock skin form at will as well as turning back into his human form.

He demonstrated the ability to pass through force fields, he can consciously shift back into his rocky form.

Like this? Let us know!
Retrieved from "https://marvel.fandom.com/wiki/Benjamin_Grimm_(Earth-1610)?oldid=6467206"
Community content is available under CC-BY-SA unless otherwise noted.