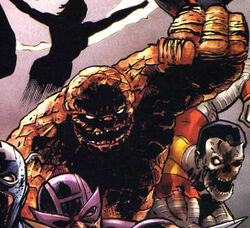 Little is detailed about Ben's life before the zombie plague arrived on Earth-2149, however it can be presumed that it followed much the same path as Thing of Earth-616.

Ben, and the rest of the Fantastic Four, had been out, presumably doing what they could for the city, believing Franklin and Valeria had been secure in a code-locked area of the Baxter Building. Unfortunately, on their return they find She-Hulk, who also had the access codes, has been zombified and killed Valeria and Ben’s godson. Furious, Sue blows She-Hulk's head up with a force field. Just then, they receive a call from Nick Fury, informing them of the gathering resistance movement aboard the S.H.I.E.L.D. Helicarrier.

On their way to the Helicarrier in the Fantasti-Car, they run into Nova and Thor, and together they headed to join the resistance. Once there, Fury calls them all together and explains that it seems to be the end of the world, and though they may have had differences in the past, they are all on the same side now.

Later, Sue, Johnny, and Ben, approach Reed, who is working on some zombie remains in a lab. Reed is extolling the virtues of zombification, and explains that as they entered he pricked their skins and infected them without their knowledge. The three, turn, fall upon and infect a cackling Reed.

Nick Fury escapes, and puts the Helicarrier in lock-down, a thick bulk-head separating the Fantastic Four from the transporter and Fury. Thing breaks his way through the bulk-head, and inside the air-lock they see Fury, Dr Strange, Storm, Nightcrawler, and Thor, who is smashing the transporter with Mjolnir. But with nowhere to run, the Fantastic Four infect the whole group. Reed then tells the others to collect the pieces of the transporter, and start moving it to the Baxter Building.[1]

Beast and Reed Richards find a sizeable stash of meat in Latveria and the surrounding area, so Ben and a huge horde of zombies head off to lay siege to Castle Doomstadt. A few of them manage to get through the magical force-field protecting the castle, and confront Dr. Doom, Scarlet Witch, and Ashley J. Williams. Scarlet Witch is bitten by the zombified Punisher, and the other two make their getaways.

Ben is presumably surrounded by the re-animated corpses of the Deadite Legion, though this, apparently, is more of an inconvenience than anything else, as they are no match for his boulder-like fists.

He, Hulk, and Wolverine crash into a room as Ash steps through a teleportation portal tossing a book behind him. Doom then destroys the device, and tells them that there is nothing they can do, as he is already infected, but Thing says he can still give him a clobberin’, and proceeds to do so.[2]

Back in New York, when Reed has made the teleporter operational, he attempts to con an alternate reality version of himself to open a passageway between their worlds. Completely fooled, the young Reed exits the teleporter into a dilapidated and abandoned Baxter Building, and when he stumbles out into the post-apocalyptic street, zombified Ben and the other Fantastic Four appear to ‘greet’ him.

Reed tells the younger version of himself, of how the plague began on this world, with purple lightening, and something falling from the sky, and that within 24 hours the planet was consumed. He says that now they have run out of food, and they try to grab the young man, but he manages to get away and flee down the sewers.

Presumably, when young Reed evades Johnny, the Fantastic Four decide they can get all the food they want by using the teleport, and go back to the Baxter Building. They arrive just as Sue, Ben, and Johnny, turn up to find out what has happened to Reed. As the zombified FF attack, Ultimate Invisible Woman protects the remaining three of the four, with a forcefield, and they manage to lock their zombified counter-parts up.[3]

They are moved to a more secure containment area, but Reed tells the younger FF that this is only temporary. According to Reed they are fed twice a day, when live animals are squeezed into the cell.

Later, with the Ultimate Fantastic Four seeking help from Victor van Damme, the zombified FF put their plan in motion. They convince the guards outside that they have created a teleportation device from a pen, the chemicals from ink, and using a hair as a keyboard.

Confusingly finding Dr. Doom coming to save the day, the zombie FF attack. Doom extinguishes Human Torch; snaps off Things arm; and using magic, necrotises Sue’s body even further. Then Reed steps up and tries to envelope Dr. Doom, but he conjures up maggots that begin to eat through his dead flesh.

Finally, the zombified Fantastic Four are dumped through the operational teleport back into the street of their own dimension.[4]

Like this? Let us know!
Retrieved from "https://marvel.fandom.com/wiki/Benjamin_Grimm_(Earth-2149)?oldid=6084918"
Community content is available under CC-BY-SA unless otherwise noted.