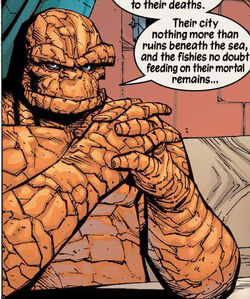 Hair
No Hair At All
Unusual Features
His skin has become rock-like
Origin
Origin
While aboard the Fantastick, Ben encountered a wave of energy from the Sargasso Sea that transformed his body into an element like Rock.
Reality
Earth-311
Place of Birth
Somewhere in England
Creators and Appearances
Creators
Neil Gaiman
First Appearance
Marvel 1602 #4
(January, 2004)

Acting as the Captain of the Fantastik, a ship designed by his friend Sir Richard Reed, Grimm set sail towards the New World. On the Sargasso Sea however, the ship encountered a strange light. Much of the crew was afraid and left the ship but the captain remained with Sir Reed, Master Storm and Susan Storm. They passed through the light and were granted strange powers, Grimm having become incredibly strong and being made out of rock. They continued their journey around the world, acting as heroes when needed. After passing through Russia the group was imprisoned by Count Otto Von Doom, Grimm held in a very small room in the dungeon where he didn't even have room to sit. He spent years bashing against one wall and over time it began to crack. During a raid on Doom's Castle, Grimm continued his wall-shaking, which freed Susan and she was able to free the others. After a confrontation with Doom, the quartet joined the crew of the Eagle's Shadow in sailing to the New World to prevent the destruction of creation. After that was complete, they remained in Roanoke before returning to England.[1]

He is capable of lifting 90+ tons

Like this? Let us know!
Retrieved from "https://marvel.fandom.com/wiki/Benjamin_Grimm_(Earth-311)?oldid=5196165"
Community content is available under CC-BY-SA unless otherwise noted.