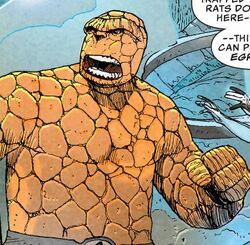 Hair
No Hair At All
Unusual Skin Color
Orange
Unusual Features
The Thing's body is covered with an orange, flexible, rock-like hide. The Thing has no apparent neck. He has only four fingers (including the thumb) on each hand and four toes on each foot. The Thing has no outer ear structure.
Origin
Origin
Mutate - exposed to cosmic rays
Reality
Earth-61112
Place of Birth
New York, New York
Creators and Appearances
Creators
Brian Michael Bendis, Bryan Hitch
First Appearance
Appearance of Death
Avengers (Vol. 4) #12.1
(April, 2011)
Fantastic Four (Vol. 4) #5AU
(March, 2013)

Thing was one of the New Avengers members featuring at the Avengers Tower along with the other Avengers teams while Abigail Brand informed that Spider-Woman was lost.[1]

Seemingly those of the Ben Grimm of Earth-616.

Seemingly those of the Ben Grimm of Earth-616.

Like this? Let us know!
Retrieved from "https://marvel.fandom.com/wiki/Benjamin_Grimm_(Earth-61112)?oldid=5216430"
Community content is available under CC-BY-SA unless otherwise noted.