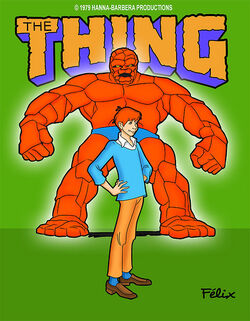 Thing ring, do your thing!

Under unknown circumstances, test pilot/astronaut Ben Grimm mutated into the rocky superhuman Thing. Aided by a scientist, he used specially-made rings to reverse the transformation and become human again. However, this had the added side effect of reverting his adult human form to that of a teenager who went by the name 'Benjy' Grimm. In this form and remaining close to seek a cure to the cure, as it were, he attended the local high school and was best friends with the scientist's daughter, who knew his secret and seemed to have a crush on 'Benjy'. When trouble (usually comical trouble of the Saturday cartoon variety) reared its head, Benjy would slam together his 'Thing Rings' and resume the form of The Thing. Apart from the awkwardness of the situation (which was really not explained until the show's final episode), the only regular trouble for Grimm came in the form of an equally comical version of the Yancy Street Gang, who in this version seemed a bit similar to the Bronto Bunch from the old Pebbles and Bamm Bamm Show. In what was likely meant as a finale, the scientist made a last ditch effort to undo Grimm's conditions, but like with Ben's more traditional incarnations, it ended up failing and the show's status quo was kept, much to the relief of the scientist's daughter, who did not wish to lose her friend Benjy.[2]

Seemingly those of Thing of Earth-616.

Seemingly those of Thing of Earth-616.

Average in human form, superhuman as the Thing.

Like this? Let us know!
Retrieved from "https://marvel.fandom.com/wiki/Benjamin_Grimm_(Earth-700974)?oldid=6479746"
Community content is available under CC-BY-SA unless otherwise noted.