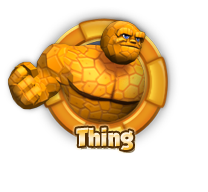 Hair
No Hair At All
Unusual Skin Color
Orange
Unusual Features
Body is covered with an orange, flexible, rock-like hide; No apparent neck; Only four fingers (including the thumb) on each hand and four toes on each foot. The increase in the volume of his fingers has not decreased his manual dexterity. His skin is apparently susceptible to "drying" or what in a normal human being would be called the loss of skin oil, for his skin can be "chipped" under certain circumstances. The Thing has no outer ear structure
Origin
Origin
Human hit with cosmic rays during a space mission which altered his DNA and caused his skin to turn into rock-like material
Reality
Earth-91119
Creators and Appearances
Creators
Matt Wayne
First Appearance
Super Hero Squad Show S1E01
(September 14, 2009)

I say ol' chap, it appears to be time for clobberin'!

With super-strength and an orange rocky hide, the gruff, grumpy Thing is always ready to yell "It's Clobberin' Time!"

Seemingly those of the Thing of Earth-616.

Seemingly those of the Thing of Earth-616.

Like this? Let us know!
Retrieved from "https://marvel.fandom.com/wiki/Benjamin_Grimm_(Earth-91119)?oldid=6058054"
Community content is available under CC-BY-SA unless otherwise noted.