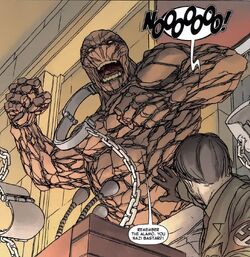 Ben Grimm was from a world where Adolf Hitler was successful in World War II and managed to conquer the entire world. Grimm was Jewish and as such was in a concentration camp in Boston when he was approached by Doktor Richards to pilot his team into space. After the team's return, they had mutated and Ben Grimm became a rock like monster and was convinced by Doktor Richards to kill Hitler when he was hosting a celebration for the team. The Sturm siblings then attacked Ben and Sue killed Ben.[1]

Seemingly those of the Benjamin Grimm of Earth-616.

Like this? Let us know!
Retrieved from "https://marvel.fandom.com/wiki/Benjamin_Grimm_(Earth-98570)?oldid=6449450"
Community content is available under CC-BY-SA unless otherwise noted.