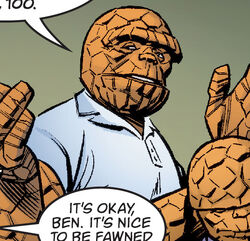 The history of Ben Grimm of Earth-9997 closely mirrors that of his Earth-616 counterpart, his origins and much of his past history and adventures with the Fantastic Four remain the same.

Recent history on Earth-9997 found the release of the Terrigen Mists into the air which caused the entire human race to mutate. During this time, a massive food shortage occurred and so the countries of the world became more dependent of the consumption of fish, which struck the anger of Namor, king of Atlantis, he would team up with Dr. Doom and attack the United Nations.

At that time the Fantastic Four (the original members, with the inclusion of Reed and Sue Richards' son, Franklin) and Captain America arrived to stop their attack. During the battle the Human Torch's neck was broken by Namor causing Franklin to curse the Sub-Mariner to burn forever, making the monarch flee back into the ocean. Meanwhile, Dr. Doom and the Invisible Woman would be killed in an explosion.

This marked the end of the Fantastic Four, over the years Ben Grimm would marry his long time girlfriend Alicia Masters (who had mutated to have the ability to bring life to the lifeless), they would own a house on Yancy Street (storing most of Reeds inventions there) and have two children, Buzz and Chuck, possibly using Alicia's newfound powers to circumvent factors that might have prevented them from doing so. They would live a humble existence.

Some years later, they would be visited by Adam Warlock and Her, who sought to birth a child, Alicia would help them in this matter unaware that the child that Her would birth would be the reincarnation of the Kree soldier Mar-Vell. Shortly after, the Grimm's were visited by the Inhuman Royal Family who had come seeking Reed Richards to help in finding their lost nation on Earth. Ben would invite them in for dinner and inform them of the changes that had happened on Earth since their departure, including the last adventure of the Fantastic Four.

Ben would later be visited by Reed himself, shortly after the Inhumans visited him, seeking diagrams of Charles Xavier's brain patterns in order to mimic them so that he could use Cerebro to track the Inhuman nation. Thing was present when Reed used Cerebro to determine that everyone on Earth was mutated by the Terrigen Mists.

Thing would later be recruited by Captain America to be part of an army of heroes from all over the world to stop the Skull from making everybody his slave. Eventually with the help of Alicia's clay Marvels the Skull was defeated, and the Celestial embryo growing in Earth's core would be destroyed by Galactus. After the lighting of the Human Torches that would burn the Terrigen Mists out of the Earth's atmosphere, Ben Grimm and his family would return to Castle Doom in Latveria with Reed Richards.

There the Thing would help Reed, as well as witness the rebirth of Mar-Vell through Her, and try to stop an army of invading mutated humans from kidnapping her. Some three years later, after noticeable weather changes due to the planet repolarization, the Thing would be asked to retrieve the now three years old Mar-Vell from his hiding place in Atlantis. After a brief scuffle with Namor, the Thing succeeded in bringing Mar-Vell back. Thing would then witness Mar-Vell bringing Susan Richards back to life using a combination of one of Reed's arms, Alicia's sculpting abilities, and Adam Warlock's Soul Gem.

Following the death of Captain America, Ben and Alicia were asked to go to Mount Rushmore and carve the Captain's face in the side of it, to pay homage to the hero and what he stood for.[1][2]

Following the final outcome of Mar-Vell's quest to kill Death, people were now unable to die, no matter what had happened to them. The Human Torches would then be taken down and converted into hospitals. Ben would remain at the hospital located in Latveria, where he would help Reed around in his lab.[3]

When it was decided by the worlds smartest minds that a new death would have to be made, Ben remembered an adventure he had with Captain America where he had met a creature named Jude, the Entropic Man. Hoping to revive Jude and synthesize his ability to cast entropy, Thing would lead the group to where Jude's inert form would be found in the Florida Everglades.[4]

When Annihilus and Blastaar came to Earth's dimension because they blamed Reed Richards for the anti-matter star in their universe sudden expansion, Reed realized that it was really Mar-Vell's newly built "Paradise" which was the cause. Thing would be one of the many heroes that would accompany Reed into the Negative Zone who would work as back-up in case Reed's attempt to contact Mar-Vell had failed.[5]

What happened to the Thing after this event is presently unrecorded.

The Thing has super-human strength and rock hard skin that matches that of his Earth-616 counterpart. In spite of the fact that he is in his middle age, it does not appear as though his strength has waned over the years.

eemingly those of Benjamin Grimm of Earth-616.

At one point, Ben had the remaining inventory of Reed Richard's inventions in a closet in his house.

Like this? Let us know!
Retrieved from "https://marvel.fandom.com/wiki/Benjamin_Grimm_(Earth-9997)?oldid=5742876"
Community content is available under CC-BY-SA unless otherwise noted.