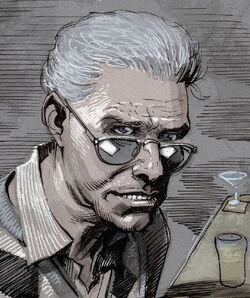 Benjamin Parker was a former airplane pilot of World War One, in which he earned an outstanding service for his participation. After the war, however, he believed that the war he fought wasn't entirely honorable and didn't see himself as a hero. Ben later became a social activist along with his wife May Parker during the peak of the Great Depression. His actions brought the wrath of crime boss The Goblin and his Enforcers, in which they beat Ben and finally had the Vulture devour him, killing him.[1]

Like this? Let us know!
Retrieved from "https://marvel.fandom.com/wiki/Benjamin_Parker_(Earth-90214)?oldid=5785837"
Community content is available under CC-BY-SA unless otherwise noted.