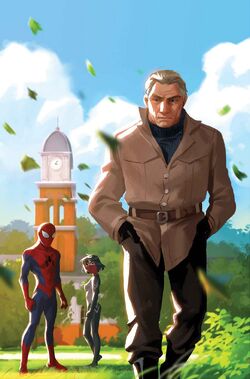 If I could bring back my brother and my sister-in-law, I would in a heartbeat. Hell, I'd just like to tell them I love them. Just one last time.

Ben Parker seemingly had the same history as his Earth-616 counterpart up until the day his nephew, Peter, attended a public exhibition demonstrating the safe handling of nuclear laboratory waste materials, sponsored by the General Techtronics Corporation.

On this day, Hyrda invaded Ben's neighborhood of Forest Hills. He was able to locate and rescue the time-displaced Silk and Spider-Man of Earth-616.

Spidey explained to him that he and Silk were superheroes from the future. Skeptical, Ben interrogated a Hydra agent who not only backed up their story, revealed that they believed Chronosaurus Rex, a third time-traveler, to be the future counterpart of Agent James Harper. Searching the home of James and Maria Harper, they found the home in ruins, possibly the results of domestic abuse. Ben discovered a note saying "Gone to Martha's" and the three went to the home of Maria's sister. Finding Maria in Martha's Hell's Kitchen home, Harper revealed that Hydra had a base in Red Hook.

Losing faith in the mission, "Tony" began to pout until a newspaper landed on his face. Reading the headline and then showing it to Cindy, they set out to fix their other problem: being de-powered. On the way to New York Hall of Science, Ben accidentally caused Dr. Eric Schwinner to be stuck in traffic. Later, Ben killed a Radioactive Spider that was going to bite his nephew Peter. He introduced Peter to "Tony," who was impersonating Schwinner, and the two convinced Peter to utilize Schwinner's equipment to locate radioactive pulses, which confirmed their suspicions that Hydra had a base in Red Hook.

Ben, Cindy, and "Tony" left to Red Hook and staked out Hydra's base until an opportunity to strike occurred. Chronosaurus Rex, the one that brought Cindy and "Tony" from the future< located them and asked to team-up to rescue James Harper. She revealed that she was James' daughter, Ines; how she obtained Project Backtrack; and that the suit could no longer time travel. The four stormed Hydra's base to rescue James and utilize Hydra's Backtrack power source. During the fight, Ines was forced out the suit by its creator, Agent Cole, who replaced Rex's power battery. James quickly figured out his relation to Ines, denouncing Hydra, and helped in the fight against them. Once most of the Hydra forces were defeated, Ines and James had a heartfelt goodbye; "Tony" constructed a plan to prevent future-past Ines from traveling back in time, deleting this timeline.[1]

Seemingly those of the Ben Parker of Earth-616.

Seemingly that of the Ben Parker of Earth-616.

Like this? Let us know!
Retrieved from "https://marvel.fandom.com/wiki/Benjamin_Parker_(Earth-TRN567)?oldid=5221169"
Community content is available under CC-BY-SA unless otherwise noted.