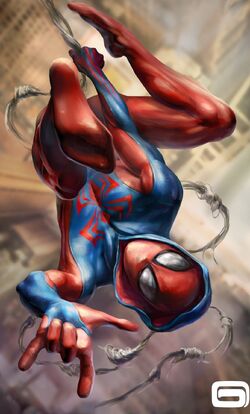 We both have roles we were cloned to play.

After his latest resurrection, Ben Reilly was rescued by S.H.I.E.L.D. before he could by again be killed by his creator, the Jackal. After his genetic template, Peter Parker, was captured while protecting a now AWOL Mayhem. He joined the Spider-Men, using the Spider-Man identity until Peter's return and taking April under his wing, adopting her as his niece.

As a result of his multiple deaths and resurrections, Ben's mind created an alter ego akin to that of his creator. Using the original Jackal's cloning technology, he almost destroyed the world. Ben was able to return to his heroic self and retook the Scarlet Spider mantle, but his other persona often caused Ben to commit villainous acts.

Scarlet Spider was among the Spider-Men that traveled to Klyntar to prevent Poison from creating an army and Dormammu from taking over said army and taking over the Multiverse. It was revealed that Ben was still caring remnants of the Carnage Symbiote, that took over Ben's body once he reached the planet. Luckily, Mayhem forced Carnage off Ben. When he learned of Prowler's plan to sell his soul to Mephisto for enough power to defeat Dormammu, he had SP//dr stop him, but took the deal himself and personally confronted his host, Dormammuverse Spider-Man.

Unable to cope with owing his soul to Mephisto, he decided to go to Mephisto himself and demand his soul back. With the aid of Spider-Cowboy, he was able to find a portal into Mephisto's Realm. After making his way past Mephisto's guards, he was found by Anansi, who revealed to have won Ben's soul in a game of poker and returned it Ben.[1]

Like this? Let us know!
Retrieved from "https://marvel.fandom.com/wiki/Benjamin_Reilly_(Earth-TRN461)?oldid=6058266"
Community content is available under CC-BY-SA unless otherwise noted.