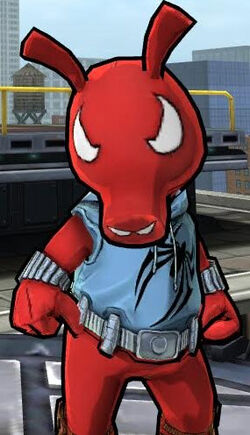 Ben Reilly was a clone of Spider-Ham who, due to a genetic defect, was considered Grade-B pork. He and his genetic template frequently clashed until, through unrevealed means, the Scarlet Spider-Ham became Grade-A pork. He and the rest of the Spider-Ham Family followed Green Gobbler through a portal to Earth, where they were found by Spider-Man and recruited into the Spider-Men.[1]

Like this? Let us know!
Retrieved from "https://marvel.fandom.com/wiki/Benjamin_Reilly_(Scarlet_Spider-Ham)_(Earth-TRN461)?oldid=6058267"
Community content is available under CC-BY-SA unless otherwise noted.