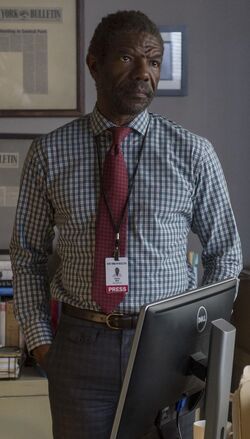 'You get what you deserve.' It's an old saying. One that has survived the years, because it's true. For the most part. But not for everyone. Some get more than they deserve. Because they believe they aren't like everyone else.

Ben Urich was a reporter for the New York Bulletin, who had started investigating the appearance of a new mysterious mob boss.[1]

Urich was also contacted by Karen Page, who wanted his help in uncovering Union Allied's activities past the scandal of corruption, knowing that something bigger was going on.[2]

In an attempt to expose Wilson Fisk and his criminal activities, Ben and Karen visited Fisk's mother in the St. Benezet nursing home, where she was living. For bringing his mother into the investigation, Fisk surprised Ben at his apartment and strangled him to death after confronting him.[3]

Like this? Let us know!
Retrieved from "https://marvel.fandom.com/wiki/Benjamin_Urich_(Earth-199999)?oldid=6073829"
Community content is available under CC-BY-SA unless otherwise noted.