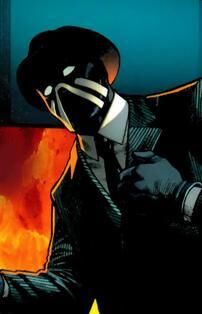 I'm right here. And I'm offering you a change. A chance for us to be together again. And for our first family night? Wer'e gonna make some TV dinners... And you're gonna watch me murder the hell out of Flash Thompson.

Bennett Brant was the brother of Betty Brant who got into gambling debt with a gangster named Blackie Glaxton to pay for his mother's medical bills. With the help of Doctor Octopus, Blackie Gaxton kidnapped both Bennett and Betty as insurance against anyone preventing him leaving the country. Bennett was double crossed when Glaxton refused to free him of his debts and was fatally shot during a melee between Glaxton's gang, Doctor Octopus and Spider-Man.[1]

Apparently, Bennett didn't die and was taken by a criminal organization, which chose him to become the new Crime-Master. Bennett kidnapped a young boy, whom he wanted to become his disciple and taught him to kill. At adulthood he became his own Jack O'Lantern.[2]

At the European Eastern country Nrosvekistan, Bennett sent Jack to find the Doctor Ekmecic, who was specialist in making weapons from Vibranium and also was being chased, but by a hero, the new Venom, who was working for the U.S. army, who wanted to imprison Ekmecic.[3]

While in the Savage Land, trying to get an Antartic Vibranium shipment, the mission was compromised by Venom, who was able to find the shipment and destroy it. After taking control of an helicopter of his, Venom was contacted by Crime-Master saying that he knew his identity and that Jack kidnapped Betty Brant. He told him Betty's location, but warned him not to interfere.[4]

Then Jack attended Thompson's father funeral, where he took him to Crime-Master, who assigned Venom a mission, blackmailing him with killing his family. Thompson went to Las Vegas and found Jack, who would go with him. At Las Vegas, in a secret lab, Jack and Venom found the Toxin symbiote, after battling an unleashed Venom, Jack flew away with the symbiote in a container.[5]

He kidnapped Betty Brant again, but this time revealed his identity, that of her deceased brother. After Venom arrived to his hideout, Bennett almost killed him with a "sonic gas" pistol and a flamethrower, but he was shot and killed by Betty.[7]

Like this? Let us know!
Retrieved from "https://marvel.fandom.com/wiki/Bennett_Brant_(Earth-616)?oldid=5241249"
Community content is available under CC-BY-SA unless otherwise noted.