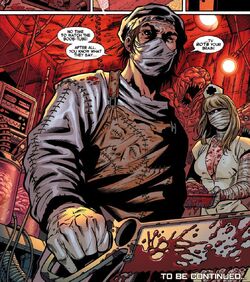 Make way, boys! Medical science is on the march here!

Algernon Rottwell was a madman sent to Dunwich Sanatorium, where his insanity was diagnosed incurable. He was locked in a special cell made specifically for him. He caused a riot and took control of the Sanitorium, allowing the patients to take the place of workers and killing the workers to harvest their brains. He was also hired by mobsters to create murderers in order to do their biding.[4]

One day, when Logan was investigating the sanitorium, Dr. Rot captured him and turned him into one of his patients. Rot erased Logan's memories and tried to awake his bloodlust instinct.[5] After a few weeks, when Logan began remembering, Rot had Logan strapped to an operation table in his laboratory and connected Logan's brain into his "God Brain Machine," a device that allowed him to manipulate, view and shut off people's thoughts,[6] and found a code with tirgger phrases that Weapon X had introduced into Logan's brain in order to control him.[7] When a group of mobsters arrived at the facilty, due to some of their members going missing, Dr. Rot unleashed the patients on them. During this time, Logan's teammates Nightcrawler and Psylocke arrived at the asylum to rescue him, and began defusing the Dr. Rot's machine. Logan was able to free himself and disembowel Rot. However, Rot managed bandage himself and get away, but not before assuring Logan that they would meet again.[3] When Sabretooth threw a party for his birthday, Dr. Rot tried to join the celebration, but he wasn't invited and was forced to leave.[8]

Rot eventually began to use the trigger words he had implanted in Logan's brain to control him and use him to harvest more brains. Logan caught notice that he was being manipulated, and tried to find Rot, only to be ambushed by Rot's Flesh Puppets.[9] Once Logan managed to find the Rottwell residence, he was ambushed and captured by Rot's "family" of fellow deranged psychopaths.[1] After torturing Logan, Rot managed to break down his mental defenses and overrode his brain and personality with that of Tater Pud, one of his "family" members whom Logan had fatally injured. When the FBI arrived at the Rottwell residence to investigate, Rot had his family attack them.[10] Logan was eventually able to take control back of his body and murdered Rot's family before killing Rot himself, and he burned the residence down afterwards. However, Rot's assistant, Nurse Fester, brought him back through a clone body.[11]

When Deadpool held an auction for a manfunctioning Rigellian Recorder, Rot and his family were among the villains who tried to get their hands on the robot, but Deadpool and his Mercs for Money sold the robot to the Ozarks Kingpin.[12]

Rot then tried to create an army of pig monsters, but he was eventually busted by B. Urich and J. Drew Private Investigators, thanks to Ulysses Cain who foresaw this.[13]

None, a normal human

Skilled scientist: Rot is an intelligent doctor, being able to build machines filled with brains,[6] keep people alive despite having their brains removed,[2][1] and created the zombie-like Flesh Puppets, using Logan's brain tissue.[11]

Insanity: Dr. Rot is a psychopatic maniac, because of his maternal lineage,[1] and was deemed incurable.[6] He also appeared to be a cross-dresser as he was shown wearing a white, a blonde wig and a female mask.[2]

Brain Machines: Machines filled with brains of Rot's victims, he used these machines to look through the memories of his patients and control them.[14][15]

Psychic Bombs: Handmade bombs made out of brains. When set off, they turn people crazy for around 30 seconds.[3]

Giant Nutcrackers: A giant pair of nutcrackers which was used by Rot to break the skulls and get the brains more easily.[3]

Like this? Let us know!
Retrieved from "https://marvel.fandom.com/wiki/Bentley_Newton_(Earth-616)?oldid=5844244"
Community content is available under CC-BY-SA unless otherwise noted.