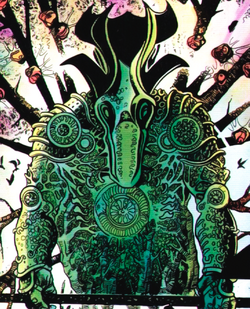 The Green Knight is an entity resulting from the merger between the Green Man, the aspect of the primordial Earth Mother Gaea representing life and rebirth, and the mortal nobleman Bercilak de Hautdesert.[2] The Green Knight is known as the Lord of the Wild, whose pulsing lifeblood feeds the very heart of nature,[3] and the personification of the lifeforce of the Earth realm. It is believed that if the Green Knight dies, the world dies with him.[4]

Since the dawn of time, the Green Man has been engaged in an eternal struggle with his antithesis, the Red Lord, Gaea’s dark aspect, which represents decay and entropy. Their age-old rivalry is never intended to have a victor or loser, as it preserves the balance of nature. Throughout the ages, the Green Man and Red Lord have used mortals and gods alike as their proxies to oppose each other.[2]

In 5th century Britain, with the help of Gaea's high priestess Morgan Le Fay, the Green Man merged with mortal nobleman Bercilak de Hautdesert, becoming the Green Knight so that mortals of that time could better comprehend him.[2] He then ventured to King Arthur's court in Camelot and formed a sacred bond with the knight Gawain, resulting in a pact between mankind and nature that neither should take more than he can give back or destroy more than he can replace.[5]

Retreating to his Green Chapel within Avalon, the Green Knight watched over the Pendragon spirits, ageless auras that carry with them skills and traits from previous hosts, granting the current hosts augmented abilities, powers and senses to be used in the Green's defense. In the past, these champions included King Arthur Pendragon and the Knights of the Round Table.[2]

In modern times, the Green Knight began to grow weak due to mankind's environmental abuses and desperately lashed out by killing several mortals who were ravaging the planet and its biosphere as a result of the Red Lord's influence. He then empowered a new generation of the Knights of Pendragon to fight the Bane, the Red Lord’s destructive disciples. The new Pendragons included the superhero Albion, who became a Pendragon during the first World War, and, more recently, the Knights of Pendragon. Whether the Green Knight had any connection to the Pendragon spirit which was given to the Black Knight is unclear, though it seems likely. Although several Pendragons were killed in their efforts to stop the Red Lord from venturing to Earth from the netherworld realm of Annwn, the Green Knight resurrected them to prevent the Bane from invading Otherworld. The Red Lord's army ultimately retreated, and the Knights of Pendragon began using the Green Chapel as their base.[6]

Most recently, during an extraterrestrial Skrull invasion of Otherworld, the Green Knight unusually offered minimal resistance and assume the form of a human knight as opposed to his preferred wooden large form.[7] He was temporarily incapacitated until Captain Britain defeated the Skrull invaders and was later restored by Pete Wisdom and MI13 after Wisdom unleashed dark magic.[8]

The Green Chapel recently became the target of the Manchester Gods during their war against the Lords and old gods of Otherworld. The Manchester Gods hoped to weaken the old gods' hold over Otherworld by destroying their places of power; however, the Green Knight fiercely defended his Chapel.[9]

During the events of the Revolutionary War, the Green Knight was paralyzed by Mys-Tech, using their corrupting influence and the DNA of original Knights of the Round Table to create zombie versions with a Zombie King Arthur leading them. It was thanks to Peter Wisdom once again that the Green Knight was freed. As result of Avalon being the Collective Unconscious of the British citizens, the Green Knight's appearance was transformed into an enormous basketball player capable of reviving its champion Sir Gawain.[10]

As a manifestation of Britain's Collective Unconscious, the Green Knight's powers varied and fluctuated as result of the peoples' view of the nations and its legends. The Knight could imbue humans with guiding spirits (Pendragons), employing them as his protectors. While in Avalon it could also physically engage others in combat, showing tremendous strength and speed, shape shifting and was capable of reviving others.

Moderately trained in the used of shields and swords.

Increases in pollution and feelings of hate could cause the Green Knight to weaken, sicken, and eventually die.

Like this? Let us know!
Retrieved from "https://marvel.fandom.com/wiki/Bercilak_de_Hautdesert_(Earth-616)?oldid=6525422"
Community content is available under CC-BY-SA unless otherwise noted.