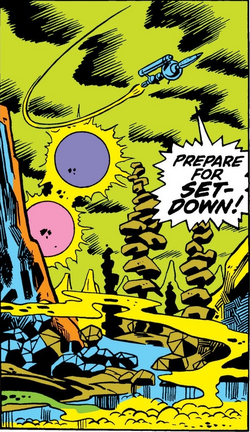 After the Warlord Supreme's spaceship, heavily damaged by the Hulk, attempted an emergency landing on Berhert, the Galaxy Master appeared to confront the Green Goliath, as the Sagittarians evacuated their ship. As the Hulk attacked the Galaxy Master, Princess Daydra took the chance to finally free her people from its slavery and her forces counter attacked. Finally realizing that he couldn't defeat the Galaxy Master externally, the Hulk jumped into the being's energy form and destroyed it from the inside, causing the creatures destruction.Liberated, the aliens confront the Princess' uncle, who backed away cowardly and ends up stumbling over the edge of a cliff to his death. After, the thankful Princess provided Hulk with a shuttle to return to his home planet.[2]

Like this? Let us know!
Retrieved from "https://marvel.fandom.com/wiki/Berhert?oldid=4881204"
Community content is available under CC-BY-SA unless otherwise noted.