Born to a group of primitive men, the Berserker was the sole survivor in a battle between his own tribe and an opposing tribe. Fleeing his pursuers, he escaped into "The Cave of Glowing Walls", an area feared by his enemies. Inside, he found the remains of those who had entered before him, but unlike the rest, he managed to go farther into the cave, growing weaker with each step. Eventually he stumbled down a cliff inside the cave but he emerged a few hours later, having gained immense powers and an insane fury. The first to fall before him were those who had vanquished his tribe. From there, he continued killing any who he came across, eventually being known as the Berserker.

Centuries after gaining his powers, he came to the ancient city of Sumer where a nobleman hired him to be his private guard, appointing him the task of killing the town's rulers. After these murders he began hiring himself out to the highest bidder, eventually being employed by the pharaohs of Egypt and Alexander the Great. 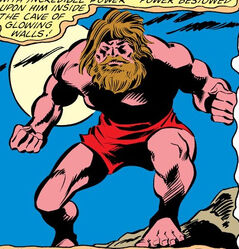 After these countless battles, his reputation somehow came to the attention of an unnamed alien race. While he at first feared them, the rush of battle quickly brought him joy and he served various alien races as he had served various humans. As on Earth, he was rewarded for his bloodlust, often with special alien weaponry.

Eventually he returned to Earth, joining the Roman Legions. In this role, he came to the attention of the Earth Lords, who feared that Rome would come to conquer all humanity. After several failed attempts, the Earth Lords caused the eruption of Mount Vesuvius, entombing the Berserker within the lava, but not killing him. Knowing he would return some day, the Shadow-Lord was appointed to watch the Earth until his return.

Revived in the present-day, the Shadow-Lord was also awakened. Viewing him as a threat, the US Navy and the Avengers fought the Shadow-Lord, leading to his death. After learning of him, the Avengers and their ally Rachel Palmer, sought out his path of destruction and attempted to oppose him. During the initial battle, Rachel was captured by the Berserker. After having her change into a Roman-esque dress, he noticed she wore a pendant kept by the Shadow-Lord and took it for himself. In the following battle with the Avengers, Wonder Man realized that the pendant must be a key to the Shadow World, but was initially knocked aside. After defeating the rest of the team and attempting to crush the Wasp, Wonder Man attempted a second strike and was successful in joining the two halves of the pendant. The Wasp then hit the pendant with her sting, shattering the pendant and sucking the Berserker into the Shadow World.[1]

The Berserker is superhumanly strong and durable, immune to aging, possesses an unquenchable thirst for battle, and is a master combatant. His arsenal includes a flying mechanical horse-led chariot which expels an oxygen-consuming energy prison; a Cerellian Power Sword releasing an energy stream that cleaves anything within 100 yards; a shield generating a controlled metal-disintegrating aura and a powerful traction force; an energy-discharging spear which can fell a jet-fighter and then return to his grasp when thrown; body armor from Aturak IV, able to withstand a proton cannon; an Arkossian dagger which embeds in and drains energy sources; and gauntlets that sap others' strength into him.

Chariot drawn by robotic horses forged of an unearthly metal. They also create a flame that doesn't burn, but absorbs oxygen faster than a normal fire.

Retrieved from "https://marvel.fandom.com/wiki/Berserker_(Primitive)_(Earth-616)?oldid=5687127"
Community content is available under CC-BY-SA unless otherwise noted.