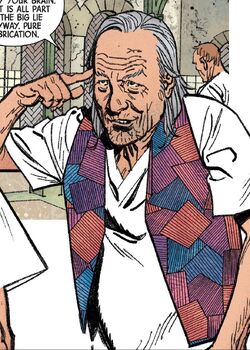 Bertrand Crawley was a homeless man living in New York, often working as an informant for the Moon Knight.[2]

Crawley has a natural flair for the dramatic, and behaves as if he were a member of British aristocracy, rather than a man living on the streets of New York.

Below Averge: In his prime, Crawley likely possessed the strength level of a normal, healthy, adult male. But with age and drink, Crawley's health and strength level has diminished significantly.

Like this? Let us know!
Retrieved from "https://marvel.fandom.com/wiki/Bertrand_Crawley_(Earth-616)?oldid=5248614"
Community content is available under CC-BY-SA unless otherwise noted.