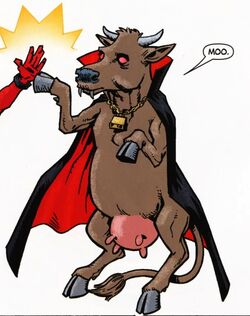 At some point in the 1670s, the vampire known as Dracula found himself starved and flying desperately around the rural farmlands of Switzerland. All of the local homeowners had boarded up their homes for the evening, and the vampire had no means of satisfying his vampiric thirst. He came upon the fields of a farmer named Hans and attacked his prized cow, Bessie. Dracula drank his fill of the animal's blood and left it for dead. The following morning, Hans discovered Bessie's blood-drained corpse and buried the remains. He even fashioned a personalized tombstone marking the spot where Bessie had died. Three nights later however, Bessie rose from the earth as one of the undead. She began prowling the countryside searching for the strange being responsible for her condition – a search that would continue for the next three-hundred years.

Not long ago, the Hellcow's journey brought her to the United States where she began stalking the communities surrounding Cleveland, Ohio. In need of human blood, the Hellcow attacked and killed a local farmer named Jubal Brown. The incident made the papers, earning the attention of an ambitious adventurer known as Howard the Duck.

Howard the Duck wanted to establish a reputation in Cleveland. As such, he sought to earn a position on the Cleveland police force by catching this mysterious farm stalker. Masquerading as a human, he began wandering the city streets at 2:00 am. Hellcow swooped down out of the sky and attacked him, but Howard kept her at bay with a push broom. Spinning back around, the heifer rammed Howard in the buttocks, sending him crashing through the window of Ray's Auto Shop. She leapt into the building to finish him off, but Howard managed to find a lug wrench in the shape of a crucifix. The cross-shaped tool bought Howard enough time in order to find a suitable hammer and stake. Howard dropped the lug wrench in favor of his new weapons and the Hellcow lunged at him. He quickly ducked out of the way, and Bessie's body slammed into a pile of steel-belted radial retreads, her fangs embedding themselves into a whitewall. Taking advantage of the situation, Howard used the mallet and wooden stake to seemingly end the blood-sucking bovine's hellish existence once and for all. Despite his heroism however, Howard was still denied a position on the Cleveland police force, much to his dismay.[1]

Despite being stabbed and buried, it was later revealed that Hellcow was not actually dead since her head was never removed afterword. After her body was exhumed by the mad scientist Dr. Kilgore, he locked her in a silver cage and began drinking her vampiric milk as a panacea for his tuberculosis, hoping it would also grant him immortality. However, when the effects began to wane over time, he decided to capture Deadpool and attempt to reverse-engineer his healing factor instead.

After luring him to his home with an online meet-up request and knocking him out with an anvil, the mad doctor forcibly removed the merc's pituitary gland and formed a drink from it. However, when the concoction ended up turning him into an undying, cancer-ridden mess, he went on a rampage and Deadpool and Hellcow teamed up to take him down. After temporarily turning her partner into a vampire himself, Deadpool bit off a chunk of Kilgore's body before catching him on fire, melting him into a puddle of goo with acid, and flushing him down the toilet.

The two left the building not realizing it was still daytime and Hellcow was instantly burned down to a hamburger patty. All was not lost, however, as Deadpool simply ran back through the pages of the comic and tried to stop himself from getting her killed. After sixty attempts, the only idea that actually worked was to stab her with a stake before she stepped outside and then remove it when night fell.[2]

Bessie later became a member of Deadpool's weapons-of-mass-destruction fencing group, Deadpool, Inc., where she assisted the group's theft of S.H.I.E.L.D. weaponry, from aboard the S.H.I.E.L.D. Helicarrier U.S.S. Deadpool, having somehow acquired robot parts that allowed her to walk upright and talk.[3] She was secretly working with Chameleon in his plan to create an army of superpowered LMD's and spying on Deadpool and Spider-Man to make sure Chameleon always stays one step ahead of them,[4] she later revealed her betrayal to the team and was defeated along with Chameleon by the combined efforts of Spider-Man, Deadpool Inc, Husk, Silk, future versions of Spider-Man and Deadpool and Master Matrix.[5]

Hellcow possessed many abilities common to other vampires, but may not have had access to a vampire's full array of supernatural powers.

As a living animal, Bessie was an adequate provider of milk.

As a living animal, Bessie possessed the strength level of a healthy, adult female cow. Upon her transformation into one of the undead, her strength level increased to supercow proportions.

Although never demonstrated, it is reasonable to assume that the various vulnerabilities that affect traditional vampires affected the Hellcow as well. As such, the Hellcow was vulnerable to the rays of the sun and required a darkened room or coffin in which to sleep. Where the Hellcow managed to conceal herself for three-hundred years has yet to be revealed.

The presence of religious symbols, or even reasonable facsimiles are sufficient to drive the Hellcow away. She is unable to attack a potential victim who is in possession of a cross of other similar icons of worship.

Whether the consumption of garlic has the same affect on Hellcow as it does other vampires has never been revealed.

Although Hellcow's body was impervious to most physical damage, a sharpened object impaled into her heart is sufficient enough to at least incapacitate her.

Hellcow wore a black and red cape draped across her back which could metamorphosize into a pair of leathery bat wings attached to her back. Whether the cape was an extension of Hellcow's physical body or an independent piece of clothing is unknown. Where she acquired the cape and learned of its properties is likewise unknown.

Like this? Let us know!
Retrieved from "https://marvel.fandom.com/wiki/Bessie_(Earth-616)?oldid=6471046"
Community content is available under CC-BY-SA unless otherwise noted.