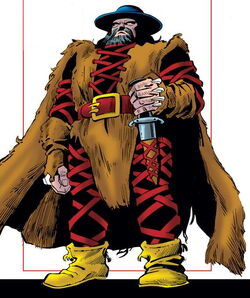 Very little was known about the past of the mysterious being who called himself Interloper. He was one of the Eternals of Earth, although for unknown reasons, he chose to have little to do with them or with the rest of humanity. However, he was known to be friends with the Eternal known as the Forgotten One.

Interloper fought the evil cosmic being known as the Dragon of the Moon many times. His first battles with the Dragon were off the planet Earth, alongside his fellow Eternals. Apparently these battles were on Saturn's moon Titan, and Interloper fought alongside the Eternals of Titan. Later Interloper alone fought the Dragon on Earth. Interloper's final battle with the Dragon before recent times took place in the Sixth Century A.D. on Earth. The Dragon had allied itself with Mordred, leader of the forces at war with King Arthur of Camelot. During the final battle between Arthur's forces and Mordred's, Interloper and his allies (whose names were not known, although Arthur himself somehow played a part) succeeded in somehow imprisoning the Dragon somewhere in space. It seemed that Interloper incorrectly believed they had destroyed the Dragon, Arthur and Mordred mortally wounded each other during this battle, and both died.

Interloper returned via bonding to Will Fanshawe.[4]

Interloper possesses the conventional attributes of the Eternals of Earth as well as certain special abilities developed through rigorous discipline.

Immortality: Like all Eternals, his life force is augmented by cosmic energy and he has total mental control over his physical form and bodily processes even when he is asleep or unconscious. He is functionally immortal in the sense that he is immune to the effects of aging and is immune to all known Earthly diseases. However, this does not mean that Interloper is incapable of dying.

While he has had no formal training, Interloper's powers make him a formidable combatant.

Like this? Let us know!
Retrieved from "https://marvel.fandom.com/wiki/Betilakk_(Earth-616)?oldid=6189531"
Community content is available under CC-BY-SA unless otherwise noted.