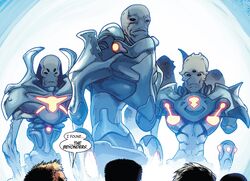 We are beyond. Dreamers. Destroyers. All of reality our whim. Who dares stand before us?

The Beyonders were a near omnipotent alien race from a dimension outside the Omniverse.[3] They commissioned the Nuwali to create the Savage Land and created the Fortisquians to be colonizers.[4]

When the High Evolutionary started to collect the extradimensional mass he needed to build his Counter-Earth, the Beyonders took notice and hired the alien Sphinxor to observe his progress and make preparations to steal the planet for them once it was completed.[5]

As part of their biggest experiment yet, the Beyonders created a singularity across every reality: the Molecule Man. Each Molecule Man would take his universe with him once he died and the Beyonders planned to bear witness to the simultaneous death of everything in the Multiverse. However, the time-travelling Doctor Doom and Molecule Man of Earth-616 united forces to thwart their plans by killing every Molecule Man in existence before his natural death.[6] A contraction in the Multiverse's timeline was created when the universe of their first victim died with him, forcing two universes to collide. their respective Earths serving as the point of impact.[7][6] The moment in which that happened became known as an incursion.[7]

Eight years later, Doom began to gather disciples to help in his quest. They were the Black Swans, women from numerous universes who worshipped him as Rabum Alal, the Great Destroyer. Two years after that, the Beyonders realized something was wrong with their experiment and created the Mapmakers and Sidera Maris. Their purpose was to chart worlds where Molecule Men had died, thus marking the movements of the Black Swans, seeding sacrifice worlds, and preserving future incursion worlds.[6]

Soon after being hunted down by the Avengers, the Illuminati sent Yellowjacket on a mission to find Rabum Alal.[1] During his journey, Yellowjacket witnessed as the Beyonders annihilated the Celestials, Eternity, Infinity, Lord Chaos, Master Order, the In-Betweener, and even the Living Tribunal throughout all realities.[8]

Later on, the Beyonders killed all of the Multiversal Avengers upon being confronted by them.[9] Using kidnapped Molecule Men, Doom created a bomb that he launched on the Beyonders after drawing them out of their dimension. The detonation of the bomb reduced the number of remaining universes from hundreds of thousands to less than two dozen, but managed to destroy the Beyonders.[6][2] Doom absorbed their powers afterwards and used them to create Battleworld.[10]

Nigh-Omnipotence: The Beyonders wielded omnipotence on their fingertips, exeeding those of the Infinity Gems.[11] They have been shown to be powerful enough to kill the Living Tribunal itself in all realities simultaneously, as well as wiping out multiple powerhouses, such as Eternity and the Celestials, of every universe.[8] One alone easily overpowered the combined might of Thor, Hyperion and Starbrand, suffering no visible damage of their attacks until Starbrand's detonation.[9] Such was their powers that they were not constrained by space or energy or anything within reason.[9] They can create and destroy stars on whim,[9] build whole universes and give ideas form.[2] Furthermore, the Beyonders can create pocket realities as incubator units of energy for their young.[12] Despite their enormous power, they are unable to travel time[6] and are not very durable against overwhelming forces, as one was killed by Starbrand's explosion.[9]

The Beyonders were described by Doctor Doom as being linear. They are constrained and restricted to their own sequential timeline, so they are unable to travel through time.[6] They can be destroyed by utterly overwhelming force, such as the detonation of Starbrand, or the Molecule Men from various universes.[9][2] Additionally, the Great Society encountered one of the Beyonders in the past, and found a way to defeat it or at least survive the encounter.[13]

Beyonder; possibly Those Who Sit Above in Shadow.

Like this? Let us know!
Retrieved from "https://marvel.fandom.com/wiki/Beyonders?oldid=6447773"
Community content is available under CC-BY-SA unless otherwise noted.