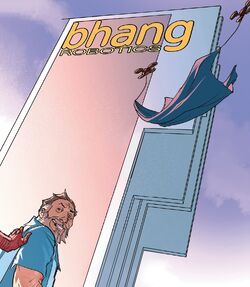 Bhang Robotics was fledging company owned by Andy Bhang that specialized in robotics development. After having won the humanoid division at the International Robot Soccer Championship, they were single-handedly defeated by a new challenger, the child prodigy Tony Stark.

Twenty-five years later, Tony acquired the assets of Bhang Robotics through its investors, and absorbed the company into Stark Unlimited, with Andy Bhang becoming a key player in the Robotics Division of Stark's company.[1] Following Stark Unlimited's short-lived acquisition by Stark Unlimited's main competitor, Baintronics, and Baintronics' role in oppressing artificial intelligences during the robot revolution, Tony Stark decided that his company had too much baggage. He bequeathed the Stark Unlimited HQ to Andy, and changed its logo to Bhang Robotics'.[2]

Like this? Let us know!
Retrieved from "https://marvel.fandom.com/wiki/Bhang_Robotics_(Earth-616)?oldid=5682591"
Community content is available under CC-BY-SA unless otherwise noted.