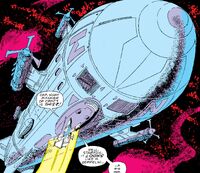 Built to resemble a massive zeppelin, the Big Casino is a mobile casino (and presumably a hotel) that travels around the star system of Kral IV, a Skrull colony whose residents usually take on the appearance of 1930s American citizens. It belongs to "Floyd Donahue", and a visited by the Avengers in their search for Zabyk.[1]

In addition to being a hotel/casino, the spaceship also served as a hanger for a small fleet of fighter starships built to resemble WW1-era Earth fighter planes.

Retrieved from "https://marvel.fandom.com/wiki/Big_Casino_(Spaceship)?oldid=5494381"
Community content is available under CC-BY-SA unless otherwise noted.