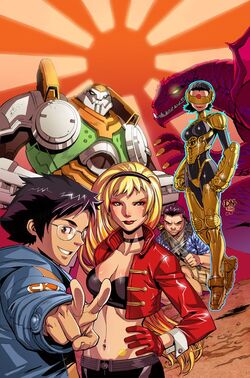 When the Japanese government wanted a team of state-sanctioned superheroes at their disposal, a top-secret consortium of politicians and business entities known as the Giri was formed to recruit and train potential superhuman operatives for "Big Hero 6". Despite reservations by some members of the Giri, Silver Samurai, a freelance ronin and former bodyguard of the terrorist Viper, was appointed as field commander of the group. Secret agent Honey Lemon, inventor of the nanotechnology-based Power Purse from which she could access any object, also agreed to join the team. The tough-talking Gogo Tomago, able to transubstantiate her body into a fiery force blast by uttering her code-name, was released from prison on the condition that she serve on the team. The Machiavellian bureaucrat known only as Mr. Oshima was appointed as the Giri's spokesperson and coordinated Big Hero 6's activities.

Government scientists next identified smart boy genius Hiro Takachiho as a potential operative. Unimpressed with the Silver Samurai, Hiro declined joining the team until his mother was kidnapped by the Everwraith, the astral embodiment of all those killed in the 1945 nuclear attacks on Hiroshima and Nagasaki.[1] Joined by Baymax, a synthetic bodyguard capable of synth-forming into a dragon which was created by Hiro using the brain engrams of his dead father, Hiro reluctantly joined forces with Big Hero 6 to prevent Everwraith from slaughtering millions in downtown Tokyo.[2] During the battle, Big Hero 6 was joined by Sunfire, Japan's premiere super hero and a mutant with the ability to super-heat matter into plasma, who was instrumental in the Everwraith's defeat.[3]

Soon after, Big Hero 6 moved their headquarters from the Giri Office Building to Japan's Cool World Amusement Park, where they were attacked by X the Unknowable, a monster born from a child's drawings that could transform its atomic structure into any form and shape. With the help of Alpha Flight, Big Hero 6 destroyed X the Unknowable in the fires of Mount Fuji.[4] Afterwards, Big Hero 6 continued to protect Japan from all threats, such as when the team rescued Tokyo residents from a freak blizzard caused by the Crimson Cowl (Justine Hammer) and her Masters of Evil.[5]

Eventually, Sunfire left Big Hero 6 so that he could work at Charles Xavier's X-Corporation office in Mumbai, India. His spot on the team was filled by Sunpyre, a young woman with similar solar-based powers who was pulled into this reality through the Power Purse and came to worship Honey Lemon as her own personal god. Similarly, after Silver Samurai was seemingly slain in an altercation with the assassin Elektra in Iraq, his spot on the team was filled by the enigmatic Ebon Samurai. With the two most experienced members of Big Hero 6 gone, Hiro became the team's new leader.

After the super-human Civil War, instead of forcing heroes to join the Japan Defense Agency, the Japanese government preferred to established a voluntary public partnership: the Big Hero Six, including Red Ronin and Otomo.[6]

Spider-Man rallied many of Earth's heroes including the Big Hero 6 to help stop the construction of Doctor Octopus' satellites, which the villain would have used to accelerate global warming.[13] Big Hero 6 found one of the facilities, and discovered that it was being guarded by Everwraith. Despite a tough battle, Big Hero 6 finally ended up victorious.[14]

Despite still being considered Japan's premiere superhero team, Radiance was stated to be more popular than them or Sunfire.[15] Big Hero Six were later confirmed to be engaged in a battle with the Jade-Gang-Stars on the dark side of the moon when Great Lord Dagora began attacking Tokyo, prompting Radiance and Jim Hammond to team up to protect the city.[16]

Like this? Let us know!
Retrieved from "https://marvel.fandom.com/wiki/Big_Hero_Six_(Earth-616)?oldid=6132158"
Community content is available under CC-BY-SA unless otherwise noted.