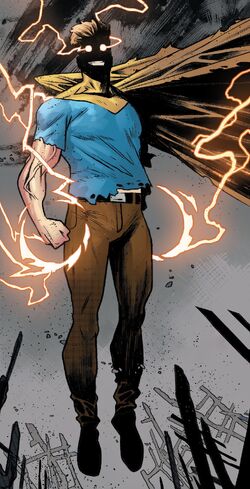 Better known as Scout, Billy Turner was the sidekick and partner of the Sentry.[1] During a fight against the Void, Scout was gravely injured and lost his left arm.[2]

After the Sentry made the entire world forget of his existence with the help of Mister Fantastic and Doctor Strange in order to stop the Void, Billy went on to live a normal life. He lived with his mother and worked at a fast food restaurant. When the Sentry first re-emerged, Billy's memories of his life as Scout returned. He suited up on his old costume and joined the Sentry and numerous other heroes at the Statue of Liberty to take a stand against the Void. When the Sentry saw himself forced to return to obscurity, Billy returned again to his normal life.[1]

Following the Siege of Asgard and the death of the Sentry, Billy attended his former mentor's burial. He initially believed nobody was going to come, but was surprised when numerous members of the superhero community arrived to pay respects.[3] A few years later, when the Sentry returned to life, he found a way to prevent the Void from emerging. He lived his double life as the Sentry exclusively while inside a pocket universe within his mind, while in the real world he trudged through a mundane life as Bob Reynolds. Bob reunited with Billy, and confided with him the existence of this pocket universe. Billy helped Bob find a job at the dinner he worked at, but harbored secret feelings of resentment and envy since he also wanted to relive his days of glory.[4] Billy set out to supplant Bob and become the new Sentry, so he contacted their retired foe Cranio, and convinced him to recreate the Golden Sentry Serum. As part of their plan, Billy broke into Bob's apartment and stole the Confluctor, the device he used to access Sentry World. He gave it to Cranio, so he could travel to Sentry World and ravage it.[5]

When Bob discovered that the Confluctor was stolen, he transformed into the Sentry in the real world. This caused his ordinary self to become trapped in Sentry World.[6] When Cranio stumbled into Bob, he exited Sentry World. Realizing that the Sentry could come close to thwarting their plan, Billy injected himself with the untested serum developed by Cranio.[5] Billy at first was able to battle Reynolds, but the Sentry formula was too powerful for him, leading to his death.[7]

Seemingly those of Robert Reynolds, but to a lesser extent.

Like this? Let us know!
Retrieved from "https://marvel.fandom.com/wiki/Billy_Turner_(Earth-616)?oldid=6076912"
Community content is available under CC-BY-SA unless otherwise noted.