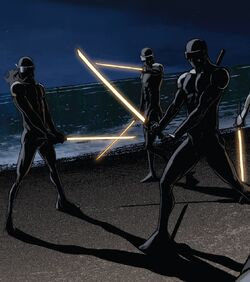 The Biohack Ninja, as dubbed by Iron Man, were an army of warriors recruited and enhanced technologically by the Techno Golem to become part of the Southeast Asia Crime Syndicate.[3]

A group of these ninja fought Madame Masque at the Stark Tower in Osaka when she was on the hunt for mystical artifacts.[4] They folllowed her trail to Marina del Rey, where they came across Iron Man, who was also looking for Madame Masque.[5] Iron Man managed to defeat the ninja, prompting them to activate a failsafe in their suits that electrocuted them to death.[1]

On behalf of Iron Man, War Machine began to investigate the biohack ninja. His inquest led Rhodes to be captured by a couple of them,[2] who brought him to their leader.[6] With Spider-Man's assistance, Iron Man located War Machine and tried to save him. Unfortunately, the Techno Golem, having stripped Rhodes of his armor and using in on herself, did the same to Iron Man. She subsequently caused an explosion that left Stark for dead.[7]

Having faked his death, Tony became a member of Osaka's underworld, under the alias of Richard Franco. After helping an ally of Tomoe named Yukio evade capture,[8] "Franco" was invited into Tomoe's circle. Accompanied by several biohack ninja, Tomoe's right hand Zhang brought him to her. In order to prove his worth to Tomoe, "Franco" later had to fight some biohack ninja to a standstill.[3]

War Machine enlisted the help of the Avengers in striking down Tomoe, having decied that Stark had spent too much time undercover. This event led to the arrest of many Biohack Ninja at the hands of S.H.I.E.L.D., which forced Tomoe to lay low until she could return.[9]

With the appearance of a new hearo named Ironheart following Stark's fall, Tomoe decided to take her down, fearing her enterprise could be endgangered once again after its resurgence. Accompanied with numerous biohack ninja, Tomoe attacked Ironheart and Rescue in Chicago and stripped them of their armor.[10] Riri managed to slip away from the fight to get help while Pepper Potts held off Tomoe's ninja.[11] When Riri got Tomoe to absorb an armor taken to the scene by a digital duplicate of Tony Stark, the Tony A.I. uploaded a virus in her systems that knocked her down. The backlash caused by the virus also shorted out the systems in the suits of the ninja, knocking them out. They were later apprehended by S.H.I.E.L.D. together with their leader.[12]

Retrieved from "https://marvel.fandom.com/wiki/Biohack_Ninja_(Earth-616)?oldid=5685153"
Community content is available under CC-BY-SA unless otherwise noted.