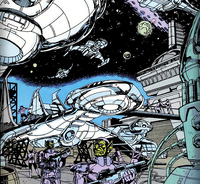 Skrulls use various models of "Bird of Prey" type of starships, large heavy fighter type to small cruiser types. All of which have two wings, a bridge, and a neck connecting the bridge to the main body. The Stealth Hawk was the most powerful and advanced "Bird of Prey" starship in the Skrull armada per Lyja when the Fantastic Four escaped from the Skrull throneworld of Satriani.[1]

One such type of starship was employed by a Skrull unit pursuing the renegade Skrull, De'Lila to Earth.[2].[2] Another similar type of spacecraft was used to deploy Skrull Mecha in New York City by a rogue Skrull in the aftermath of the Secret Invasion and afterwards in his unsuccessful attempt to escape Earth.[3]

Retrieved from "https://marvel.fandom.com/wiki/Bird_of_Prey_(Skrulls)?oldid=4549212"
Community content is available under CC-BY-SA unless otherwise noted.