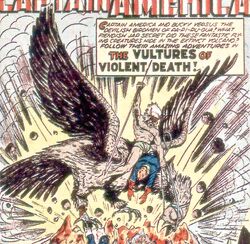 The Birdmen of Pa-Pi-Ru-Gua were a race of humans that lived on a remote island near New Guinea. They were a primitive race that commanded and flew on massive birds of unknown origins and lived inside a dormant volcano. In 1943, they were discovered by the Imperial Japanese army who convinced them to join their side, and they set up their base within their volcano home. This gave the Japanese a strategical advantage in the area.

So much so that the military called on Captain America to find it. He and his partner Bucky were shot down on the island home of the Birdmen, and they were taken prisoner. There they were told by the chief of the Birdmen that Captain America was to undergo Three Trials of Ru-Gu-Ri-Bi. If Cap won he, Bucky and the captured soldiers would be freed; if he lost, they would all be fed to the giant birds that the Birdmen controlled.

As Captain America completed these tasks, Bucky and the others broke free from the hut they were being kept in and fought their way to a Japanese bomber and saved Cap. As they fled, they dropped a bomb down into the volcano that caused it to become active again, causing a massive eruption that wiped out everyone below. If this led to the extinction of the Birdmen remains to be explored.[1]

Like this? Let us know!
Retrieved from "https://marvel.fandom.com/wiki/Birdmen_of_Pa-Pi-Ru-Gua_(Earth-616)?oldid=5544910"
Community content is available under CC-BY-SA unless otherwise noted.