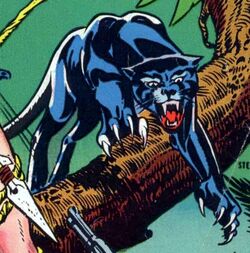 When the leopard, Julani, was shot by a guard at the Central Park Municipal Zoo, veterinarian Shanna O'Hara was asked to take her cubs Ina and Biri to Dahomey, Africa to release them into the wild.[1]

Shanna stayed with the animals and they became her allies, but they were both killed when the sorcerer, Raga-Shah, transferred their life forces into the blood beast, Ghamola, which Shanna was forced to destroy.[2]

Like this? Let us know!
Retrieved from "https://marvel.fandom.com/wiki/Biri_(Earth-616)?oldid=6451926"
Community content is available under CC-BY-SA unless otherwise noted.