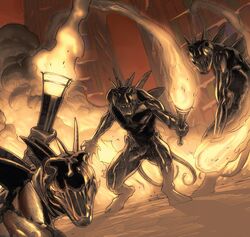 Following his humiliating defeat at the hands of mortal followers of the Thor Odinson of Earth-616, Gorr the God Butcher realized that he could not continue his deicidal rampage by himself. Gorr discovered he could use All-Black the Necrosword to manifest semi-sentient bestial creatures he dubbed the Black Berserkers, which he considered to be a part of himself.[6][7]

With each subsequent murder Gorr performed, he left a Black Berserker present to attack anyone who came to inquire about the missing gods or search for their killer; knowing that Thor would eventually seek him out.[1][2]

After Gorr travelled to the distant future, he amassed an army of Black Berserkers and sent them to capture as many gods as possible, even using the Pool of Forevers to raid the timestream. Gorr then used All-Black to create a prison-planet policed by Black Berserkers, who served as slave drivers and guards for the captured gods.[8] During his battle with the three Thors, Gorr manifested a massive Black Berserker called the Black Leviathan, which tried to eat the young Thor and All-Father Thor before the latter used the Thor-Force to destroy it.[3] The Black Berserkers were seemingly either destroyed or reabsorbed into the All-Black symbiote following Gorr's defeat, and none of All-Black's subsequent hosts have seen fit to manifest them.

When Loki bonded to All-Black, he manifested corvid entities called "Necro-Ravens" from the All-Black symbiotes.[4]

When Gorr reclaimed All-Black, merged with it, and infected the universe itself with its living abyss, he became able to manifest symbiote-infected planetoids called "Berserker-Moons" that he used to fight All-Father Thor, the Goddesses of Thunder, and Sky Lords of Indigarr.[5] The Berserker-Moons were seemingly destroyed by Thor along with the rest of the All-Black symbiote.[9]

These creatures were powerful enough to fight Gods to a stalemate.[1][11] Like their kindred, the symbiotes, they can shapeshift their limbs into bladed weaponry to augment their combat abilities.[11] As offshoots of the All-Black symbiote, the Black Berserkers' numbers varies depending on how many Gorr chooses to have manifested; and they can be re-absorbed back into the primordial symbiote at will.[3]

They were said by Thor to have no fighting skills, only fury.[1] However, they are at least semi-sentient, as several Black Berserkers took turns trying to lift All-Father Thor's Mjolnir; and a group of them razing the Halls of All-Knowing without prompting from Gorr.[11]

Thor stated they were very strong,[1] as they are powerful enough to fight evenly against Thor the Avenger and in groups can overwhelm gods as powerful as All-Father Thor, who inherited the Odinforce from his father.

While powerful enough to defeat most gods in combat, the Black Berserkers can be destroyed if they sustain enough damage. Unlike regular symbiotes but similar to the symbiote dragons, they appear to lack specific vulnerabilities to intense heat and sonics.

Variable; the host of the All-Black symbiote can manifest as many offshoots as they desire, and can re-absorb them into the main body of the symbiote.[7][10]

Like this? Let us know!
Retrieved from "https://marvel.fandom.com/wiki/Black_Berserkers?oldid=7028930"
Community content is available under CC-BY-SA unless otherwise noted.