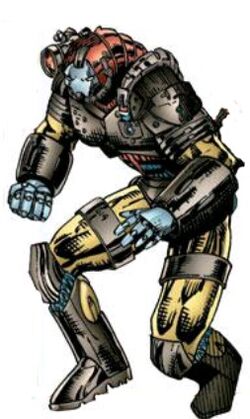 His powered armor created by the immortal Slorenian mutant Locomotive Breath, Black Brigade was a special unit in the Red Army until their withdrawal from Slorenia. Since then, he had served his new masters, Volkvhy and the Tabissara, and was merciless in his following of their orders. He was short-tempered, confident in his abilities, and underestimated Westerners. He also had a poor grasp of the English language.

Black Brigade and his robot drones arrived in their helicopter at the scene of Ember's massacre of a Slorene military unit, and finding only Force Works there, mistakenly blamed them for Ember's actions. Before Black Brigade could attack, Scarlet Witch managed to reason with him, by quoting from the Slorenian Declaration of Allegiance, and asking him to contact his superiors to verify Force Works' intent. He did so, and then led them to the Slorene Parliament building to meet with the Tabissara, where he reported to his superiors that Ember had escaped before he could deal with him. Volkhvy ordered him to let Force Works lead him to Ember, then destroy him, no matter who got in the way.

Black Brigade was sent to work alongside Force Works as an envoy in their hunt for Ember, and ordered for his gunship to be prepared for launch. After an hour of searching for Ember's location with no success, Black Brigade and Boshlovor reported to Volkhvy, Black Brigade complaining of how they were useless and just getting in his way, and quickly took offence when Boshlovor reminded him that he had spent months trying and failing to find Ember. When Force Works finally located Ember, in the old Winter Palace, Black Brigade followed, leading his drones in an all-out attack on the palace, attacking Iron Man, Spider-Woman and Century, wanting them out of the way so he could deal with Ember. Smashing Iron Man to the ground with a massive stone pillar, he was unaffected by Iron Man's attempt to disable his systems with an EMP, and ordered Iron Man to take his team and flee before they were all crushed. Black Brigade punched Iron Man through a wall, into another chamber in the catacombs below the Palace, where USAgent and Scarlet Witch had found Pavel Chenklo, the man who had become Ember. Seeing his enemy, Black Brigade opened fire on him, shattering the floor beneath him, sending Chenklo falling to his apparent death, and then thanked Force Works for their assistance.[1]

Later still, a weakened Volkhvy ordered Black Brigade to take a squad of Targoth and capture more Dudak for use in The Program, to replenish his strength. Black Brigade sent one of his drones on this mission instead, and suspecting the visiting Tony Stark, waited outside the Slorene Parliament building with two more drones; his suspicions paying off when he saw and ambushed Iron Man, and ordered one of his drones to report to the Tabissara that he had captured a spy. Believing Iron Man to be a "foreign interloper" Black Brigade had his two drones hold Iron Man while he prepared to punch his captive's head off. Iron Man broke free, decapitating the two drones with repulsors, and evading Black Brigade's punch, and a blast from his shoulder-cannon. Receiving a radio transmission from Scarlet Witch, Iron Man was informed of proof of the Slorenian's atrocities, and, knowing that Force Works' presence in Slorenia was justified, felt able to fight back, flying into Black Brigade, knocking him down. Iron Man staggered him with another punch, yet he refused to fall, and rejected Iron Man's attempts to make him give up. His presence needed elsewhere to help the rest of the team, Iron Man ended the fight quickly, ripping out Black Brigade's central cybernetic processor, leaving him unable to move. Only then was it revealed that Black Brigade had been connected into his armor so much that he depended on it for life support, and would die without it. Iron Man quickly attempted to repair his armor, and had him taken to a hospital for emergency surgery.[3]

Finally, as Ultron's forces attacked Slorenia, Black Brigade and his drones fought back, the drones destroyed by Ultron's robot soldiers, and Ultron himself tearing off Black Brigade's arm and seemingly killing him.[4]

Dependent on armor for life support

Black Brigade used a turbocopter gunship as his personal transport, carrying him and his drones.

Like this? Let us know!
Retrieved from "https://marvel.fandom.com/wiki/Black_Brigade_(Earth-616)?oldid=5834032"
Community content is available under CC-BY-SA unless otherwise noted.