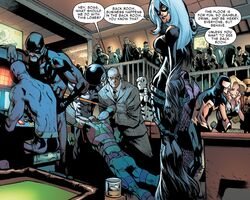 While controlling the body of Spider-Man, Doctor Octopus brutally defeated Black Cat.[1] When the Police arrested her, she lost her secret identify, her stolen possessions, and her allies. Imprisoned in Conway Penitentiary, she realized than in order to regain all that she had lost, she must have revenge on Spider-Man.[2]

After escaping from prison, Black Cat began stalking the arachnid hero, whose body was back in the control of Peter Parker.[2] During one of her stalkings, she noticed that Parker Industries was hunting Electro down to depower him. Knowing that he too was humiliated by Spider-Man (again while Octavius was in control),[3] she recruited Max onto her side.[4] She used him as an enforcer to establish some dominance over the underworld. In the process, she defeated Maggia mob boss Eel, and secured an alliance with the Goblin Nation and the Inner Demons.[5] She later tried to recruit other villains, but they declined because of her affiliation to Electro. Black Cat then thwarted Parker Industries's plan to create a prison for super villains by trying to kill Electro, but was stopped by Spider-Man and Silk. After said event, the criminals joined Black Cat's criminal army since she cut ties with Dillon.[6]

Now established as a major player in the underworld, Felicia bought the Bar with No Name[7] and, later, allied herself with Hammerhead to take down the new Spider-Man,[8] which marked the beginning of a formal partnership, as Hammerhead eventually became Black Cat's muscle and second in command.[9] Hardy additionally hired Scorpion on her side as a part-time enforcer.[10] For a short while, Black Cat even hired a man named Lee Price after he survived a shootout at a black market sale that also involved Tombstone's Gang, without knowing that Price was secretly the new Venom.[11]

After losing the Venom symbiote to its former owner Eddie Brock, Lee Price stole the Mania Symbiote from Andi Benton and used it to establish a criminal gang. He forced pieces of the symbiote into the faces of small-time criminals to control their minds, and formed his Inklings.[12] After obtaining a measurable amount of manpower, Lee attacked Black Cat's operations and used the Mania symbiote to take control of her subordinates and Felicia herself.[13] Since Black Cat's gang had been invited for the very first time to the gathering of the five largest crime families in the world, Lee seized Black Cat's operations so to make his way into the gathering and take control of the other families.[14]

Felicia managed to free herself from Maniac's influence[15] and joined forces with Spider-Man, Venom, Anti-Venom and Benton to stop him.[14][16] Unfortunately for her, once the dust settled following Price's defeat, Felicia had lost her gang and her clout.[17]

Retrieved from "https://marvel.fandom.com/wiki/Black_Cat%27s_Gang_(Earth-616)?oldid=5579247"
Community content is available under CC-BY-SA unless otherwise noted.