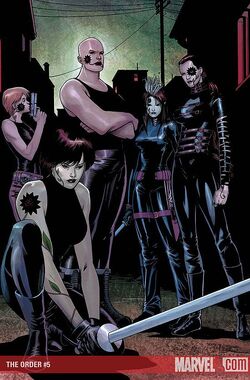 According to former member Mulholland Black, the Black Dahlias are a girl gang formed with the stated intention of "taking back the streets" for women and girls. This was accomplished primarily through beating up and humiliating those who prey on young women - namely pimps and drug dealers. During Mulholland's time with them, they were like "guardian angels" who, though deathly serious about cleaning up the streets, avoided using lethal tactics. Sometime after joining, Mulholland became the girlfriend of the leader, Cut. However, she was caught in bed with teammate Lisa, and was promptly kicked out.[1]

More recently, the Black Dahlias became affiliated with the organization called S.H.A.D.O.W., which hired them to kill members of the Order and provided them with aggregates of the powers and equipment possessed by the government-sanctioned team. They have already killed one former member, Carlos Araujo Carvahlo, attempted to kill Calamity[2], and assaulted Mulholland Black, injecting her with S.P.I.N. nanobots.[1]

Transportation: Teleporter Drang acts as the team's transportation
Weapons: Cut's katana appears to have smartware similar to that found in Bluetooth, the sword wielded by former Order member Avona, and thus can detect and identify any hostiles nearby.

The Black Dahlias take their name from an infamous Los Angeles murder case of in the late 1940s, the Black Dahlia case, which has over time been turned into a sort of morality tale about the dangers that Los Angeles supposedly poses to naive young women.

Retrieved from "https://marvel.fandom.com/wiki/Black_Dahlias_(Earth-616)?oldid=5544933"
Community content is available under CC-BY-SA unless otherwise noted.