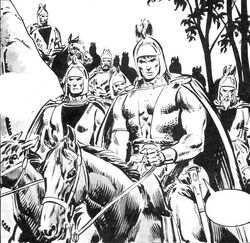 The Black Dragons was Aquilonia's king personal bodyguards, while the Black Legions were the Imperial troops.[1] They served under at least King Numedides,[citation needed] then King Conan I (with General Pallantides as commander).[1]

...[4]After Conan was abducted by the Children of the Blood-Red Doom for his blood to be used to return Razazel, his son Conn assembled the Black Dragons to retrive the King. They arrived in the Temple of Razazel as the moment Conan fell to the Children. The Black Dragons temporarly overwhelmed the Children, while securing Conan. The Children soon gained back the upper hand, slaying Dragons while feeding others to their dark lord, until Conan pushed of them into the Abyss and prevented Razazel's return. The Aquilonians then returned home.[5]

Retrieved from "https://marvel.fandom.com/wiki/Black_Dragons_(Aquilonia)_(Earth-616)?oldid=5321883"
Community content is available under CC-BY-SA unless otherwise noted.